As long as you’re sharing that article on Twitter, why not take a moment to mention it to specific people who may like it? It doesn’t take long to find that one person who would love your new post and put it into their Twitter stream. It’s called Twitter targeting.

How do you find these super-specific people? Don’t worry – Twitter is the ultimate phone book. Looking for cowboys who eat gluten-free? Want to connect with a food blogger who likes Star Trek? How about a logistics expert who knows kung fu?

You can find almost anyone imaginable.

Certain posts are born to be shared.

How to find micro-niches of people

Twitter itself has a terrible search tool with few useful options, but there are several other tools that do the job well. Here’s an example of how I used one of those tools to find people and promote some content.

I wanted to drive a little traffic to a guest post I had written about personal SEO. I was thinking that people who specialize in personal branding might like it. The post doesn’t have any particular theme, so I went to FollowerWonk and just searched for for “personal branding.” 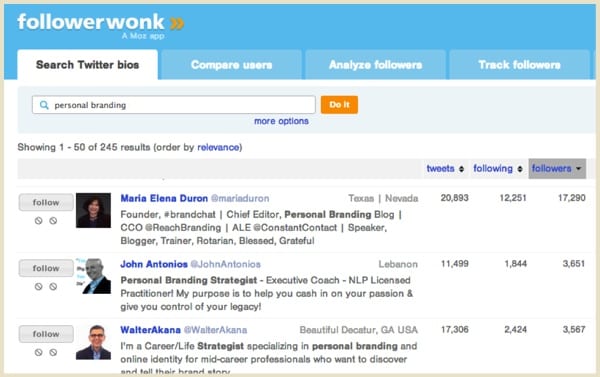 Suddenly, I’m looking at several hundred personal branding people, sorted by the size of their followings. Every one of them is a likely reader.

Tip: The FollowerWonk advanced options let you find people in your area or people who already follow you. Try that one, Twitter!

The ideal target is active in Twitter and has a large following. Beware sharing posts with people who have huge followings. A lot of people may be trying to get their attention, so it’s hard to break through the noise. Focus on people who would be the most likely to love what you wrote.

Additional reading: How to Improve Your Personal SEO

Now that you’ve found the people who are most likely to love the post, let’s try some targeted sharing. All you have to do is mention them in the tweet. Here’s my tweet with the mentions and the response that followed… 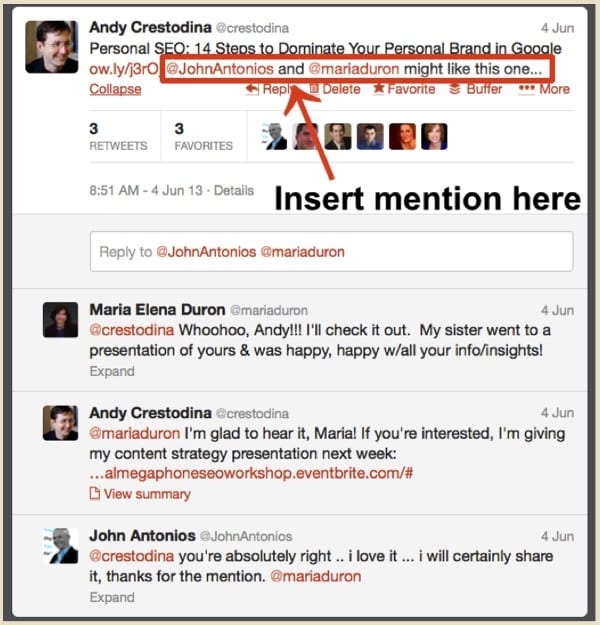 In an amazing coincidence, one of the people I’d mentioned, Maria Duron, had heard of me before. The more typical response was from John Antonios. “I love it… I’ll share it… thank you.”

I actually have low expectations when I share with specific people. I’m hoping the person shares or comments, and sometimes they do. Sometimes they don’t. Usually, if I mention two or three people, one of them responds and retweets. When they do, try to keep the conversation going.

Even if it works only half the time, you’re still being much more effective at sharing on Twitter. And the entire exercise takes less than five minutes.

Connecting with people who care? Or some kind of spam?

Think about it from the other perspective: if you’re a Star Trek fan who does fundraising, and you see a Tweet that says “Captain Kirk’s Guide to Silent Auctions,” wouldn’t you click it? You’d be thrilled to read it! And grateful to whomever shared with you.

Content promotion is about finding the right audience. Online networking is about connecting with specific individuals. Twitter targeting does both. It’s a fast, simple way to find your next superfan …and maybe a new friend.