Should I Use Drupal?

There’s an expression in the restaurant business: You have to own the bricks.

The saying is meant to express that to run a successful eatery you can’t be leasing the space you’re in. As soon as your landlord sees people lining up he can raise the rent, and suddenly it’s not as much fun as it used to be.

The same principle applies when building your website. It’s a given that your site should be built on a content management system allowing you to make updates yourself. But what if you need something more substantial done to your site? What if – God forbid – your website takes off and has to be more sophisticated to meet your growing needs?

Well, you have to own the bricks.

So… what is Drupal?

If you’ve done your homework while shopping a redesign you’ve probably come across Drupal. Drupal is an open source content management system that offers several off-the-shelf features such as ecommerce, blogs, user accounts, and just about anything else you’ve seen online. And the best part; it’s free*. 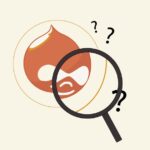 In this case, “free” means the platform is available to download and install to anyone who wishes to do so. There are no licensing fees, no upfront costs. Thousands of plugin modules are available to install and extend the functionality of your site, giving future development a head start. By simply installing Drupal it’s as though you’ve had an army of developers working on your site for over a million hours.

The advantage is once your site is built you maintain control over it and the platform it’s built upon. Since Drupal is open-source no one can claim ownership of it; you can host it where you want, bid out future work to other firms or contractors, and dig into the code yourself to become more self-reliant. That’s generally not true with a proprietary CMS.

And that brings us back to the whole “brick owning” analogy.

Now that your thinking has changed from “Should I use Drupal?” to “Why wouldn’t I?,” there are a few caveats to the upside.

Drupal is hard.  It just is.  In comparison to WordPress, another major open-source CMS, the learning curve for building and administering a site in Drupal is much steeper.

I recently attended a Drupal conference where I chatted with an IBM rep about how even his career programmers can take several months to learn its conventions. So while the freedom that Drupal web design provides may be comforting, it can also be deceiving.  There are a lot of ways to do it wrong.

That inherent complexity, however, is also central to Drupal’s success. The conference was sponsored by Acquia, Drupal’s organizing body (and from whom I’m borrowing the restaurant analogy), who presented compelling statistics in the growth of online business and the corresponding focus on the Drupal ecommerce platform, both in usage and development. Virtually everything necessary for an online store is built-in and configurable – and the code and interface is consequently complex.

Ideally you find a company you’re comfortable with and establish a working relationship. Andy has some tips on how to choose a web design company to help you . You’ll save time by working with a group of people who know your business and avoid the complications that can come with integrating code from multiple places.

But you’ll know that at the end of the day what they’re working on is ultimately controlled by you.

Ben Steinbuhler is a Project Manager at Orbit Media. You can find Ben on Google+ and LinkedIn.