As usual, times are changing.  But there is one change that is about to reach its inflection point: mobile computing.  New research shows we’re about to reach critical mass on several mega-trends.  So as a follow up to our post on Mobile Marketing 101, here’s an update on 3 mobile milestones coming up…

Tipping Point One: Most Phones are Smart Phones

You may have already heard people mumbling excuses for their old flip-phone, or defending the Motorola Razr in their pocket. (“Hey, it’s a great phone!”)  But these conventional phones (aka “dumb phones”) will likely be the in the minority some time next year. 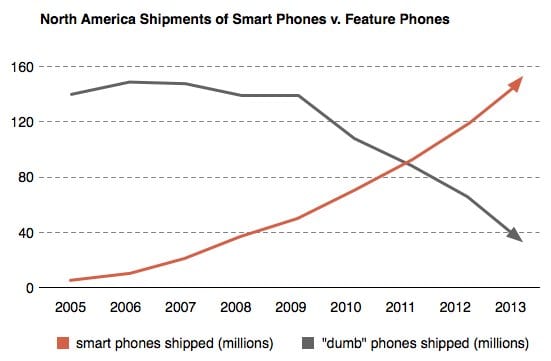 Looking at the global market, a more staggering trend is that sometime in the next few years, laptops and desktops will be in the minority.  By the end of 2012, the world will be buying more smart phones than all personal computers combined! 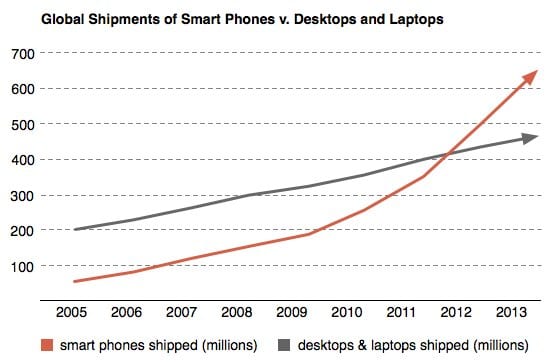 Tipping Point Three: Can The Networks Handle It?

The third tipping point isn’t statistical, it’s an actual tipping over of the networks.

As millions of new bandwidth-hungry smart phones land in people’s hands, can the wireless networks handle it?  Not so easily.  It’s beginning to look as if these already-strained wireless networks are going to tip over under the massive load. Consider this:

The networks are scrambling to keep up with this demand.  It’s made more challenging because the cellular networks were originally built to handle voice traffic, not data.

The real tipping point here will be on your cell phone bill.  Expect to pay more for your data plan, as the carriers spend billions to upgrade their networks to keep up with all the smart new phones.