Your Presentation is Ugly (And What to Do About It) 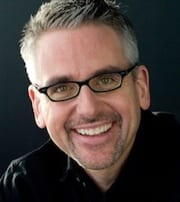 Are your presentations ugly and boring? Are you a PowerPoint abuser? An audience’s worst nightmare?

Here are some warning signs to watch out for:

If this is you, I’m going to recommend something radical: try three words per slide. Or one. Or none.

If that sounds crazy to you, let me tell you how it can be done, and why it must be done.

The Worst Presenter Ever

A couple of years ago I attended a presentation by a self-described marketing expert.

His presentation was so bad in so many ways that I resorted to taking notes on all the things he did wrong—I just knew it would make great material for a future case study. (In fact, the experience provided the inspiration for a whole book’s worth of material.)

One of his biggest mistakes was stuffing his slides with words. I counted more than 140 words on a single slide.

I use about that many words in an entire presentation, averaging less than three words per slide!

We’ve all heard that a picture is worth a thousand words. It’s common sense, right? But there’s also abundant scientific evidence to support the concept.

So in terms of stickiness, images are at least six times more powerful than words.

Take It From Seth Godin

Years ago, marketing expert Seth Godin put out a handy little guide called Really Bad PowerPoint, which should be mandatory reading for any presenter. Godin says he first wrote it in the vain hope that the ideas might spread and put an end to boring, bullet-filled PowerPoint presentations.

He’s still waiting. We all are.

Godin points out that slides “should reinforce your words, not repeat them.” He explains:

“Talking about pollution in Houston? Instead of giving me four bullet points of EPA data, why not read me the stats but show me a photo of a bunch of dead birds, some smog and even a diseased lung?”

Not only should your images supplement what you say, they should bring emotional weight to your arguments. They should be provocative, not descriptive.

There’s no big secret to creating a visually interesting presentation. One of the best free tutorials I’ve seen is in a two-part blog post on the Design Shack site called 10 Tips for Designing Presentations That Don’t Suck.

Graphic designer Joshua Johnson walks you through a simple step-by-step process that doesn’t require any special design expertise. You start by throwing out the PowerPoint templates and working from a blank page. From there, use full-screen images and just a little bit of text.

There’s more to it than that, and he gives all kinds of advice on font styles and sizes and color and proportion if you want to really dig into it.

But it’s amazing how far you can get with just the basics. I’ve had professional graphic designers tell me my presentations look like they were designed by a pro.

Where to Find Beautiful Images

So where do you find exciting, compelling pictures?

One smart tactic is to take them yourself. That way you don’t have to worry about permissions or licenses or royalties.
You don’t have to be a professional. With just a little guidance you can use your phone to create quality visuals for your presentation.

Be on the lookout as you go through your everyday business for images that could illustrate ideas in future presentations: a street sign (caution); an open door (opportunity); a pathway (the road ahead); an autumn leaf (change).

There are also plenty of online resources for rights-managed images, including CompFight and Flickr Creative Commons.

You’ll have to wade through a lot of photos to get one that’s just right. Here’s a quick guide I wrote to making the most of free image sites.

Of course, if you’re willing to pay, there’s no shortage of professional stock photography sites online like iStock.

Have You Done it Right? Here’s the Test

Many speakers design their presentations so that the slide deck can stand on its own and be understood by those not in attendance. That’s a huge mistake.

Take a look at your slides and ask yourself, “Would this make total sense to someone who wasn’t in the room to see me speak?”

If the answer is yes, then you’ve failed. Why even bother to deliver it in-person? Why not just email it to people?

“I would argue that the best presentations in the world are the ones where the slides are completely meaningless unless you have seen the speaker present them. Focus on that. Ensure that your slides act as a visual enhancement to everything that you’re saying.”

If you want to share the presentation with others (or post it on SlideShare) it’s better to create a separate slide deck for that purpose than put your audience through the misery of dense, wordy slides that basically repeat everything you’re saying out loud.

Ask Yourself, “What Would Steve Jobs Do?”

It’s remarkable to me that so many people still don’t get it, especially since examples of excellent template-busting presentations are everywhere, from TED Talks to political speeches to the legacy that Steve Jobs left behind.

Jobs is revered for many things—innovation, drive, leadership. But he was also a master storyteller and showman. Twice a year in his keynote speeches he showed us all the way.

As Guy Kawasaki puts it:

“Take a look at Steve’s slides. The font is sixty points. There’s usually one big screenshot or graphic. Look at other tech speakers’ slides—even the ones who have seen Steve in action. The font is eight points, and there are no graphics. So many people say that Steve was the world’s greatest product introduction guy … don’t you wonder why more people don’t copy his style?”

I do wonder. Every time I’m stuck in some stuffy conference room being subjected to Death by PowerPoint.

Rob Biesenbach is a veteran speechwriter, public speaker, actor and author. His new book, 11 Deadly Presentation Sins: A Path to Redemption for Public Speakers, was just released this week. You can find Rob on Twitter or over on his blog.