I recently read two posts by Srinivas Rao about making the most of a small audience. They inspired me. He says that in the beginning, when your audience is small, you have an opportunity to build super high-quality connections. You may only have a few dozen readers, but this can actually be an advantage!

I’ve combined Srinivas articles with some advice of my own. Here’s what I have for you: four steps that turn a small audience into loyal superfans…

“If you only have a few readers, treat them like the most important
people in the world because they are.” – Chris Guillebeau (tweet this)

It’s likely you already have superfans. But unless you’re paying attention, it may not be obvious who they are. Here are the telltale signs:

While you’re looking for fans, keep your eye out for those that may be very useful, such as:

Really, you’re looking for anyone who is consistently listening. Pay attention and familiar faces will appear. See them? These are your fans. If you’re lucky, you may find a few legitimate stalkers!

2. Keep them on your radar: Circles, Lists and Groups.

Now that you’ve found them, here’s how to not lose them again.

3. Personally reach out to readers.

Say hello! Simple, right? And when they share your content, say thank you. Start a conversation, then listen. A small audience is easy to listen to. Once you connect, ask them what topics they’d like to hear more about.

They key to online networking is to keep upgrading from one channel to the next, from the first tweet all the way up to lunch.

Srinivas gives the example of Chris Guillebeau, who personally emailed every one of his first 10,000 email subscribers. Yes, that’s a commitment, but just imagine how it would energize your audience. 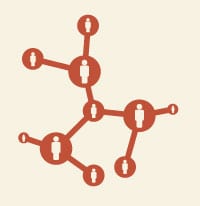 I recently wrote a post about how the phone is actually the best web marketing tool. In it, I gave an example of how one simple call led to a flurry of connections, introductions and even a lead. Phones are powerful. Don’t hesitate to reach out and blow someone’s mind.

Just dial, apologize for being so random, ask a question, listen and offer to help. The relationship is now permanently upgraded. It’s easy, unexpected and awesome. See how it goes, then take the next step…

Call me crazy, but I believe the ultra-premium-platinum-plus connection is only possible through actually meeting someone IRL (in real life). This is how true superfans are made. Big brands could never do this. But you can. It’s easy and fun.

If they’re local, grab coffee. Or find an event to go to together. Or just make yourself accessible (people who know me know where to find me on Thursdays at 6:00). Not local? No problem. Suggest a quick Hangout on Google+ or a Skype call. Jane Boyd’s 45 Conversations is an excellent example.

Anytime I meet someone who has read something I’ve written, I always ask for feedback or ask them to suggest a new topic. I’m always open to input. And now that you’ve had the ultimate chance to listen, you’re ready for step four.

“When your audience is small,  you can run your blog like a VIP experience.” – Srinivas (tweet this)

When you follow these steps, suddenly your website becomes an online networking tool. You never know who you might meet! Just like any other networking, there should be reciprocity. If they show a little love to you and your content, return the favor.

These tactics may not scale well as you grow, but remember: the goal isn’t to be big, it’s to connect and be real. One superfan is worth more than 1000 casual acquaintances of random followers.

Tip! Read this post backwards and find tips on how to be a good superfan. It’s a fun way to get the attention of a blogger, journalist, or prospect …and to make a new friend. As Srini says, “Make friends, not followers”