How to get more Twitter Followers: 10 Semi-Legit Ways to Grow Your Following Fast

Social media marketers put high value on the size of a following, so here’s a conversation that happens a lot between marketers.

Sound familiar? Maybe you’ve heard this conversation or been part of it. Maybe dozens of times.

But here’s a less common question:

Q: “Why do some Twitter accounts grow faster than others?”

This post answers that question. Then it goes into some practical tips to grow your Twitter following, including some of the more spammy tactics. Yes, we’re going to step over to the dark side of social media.

Quick disclaimer: before you scorch me in the comments, please understand that this post is informational only. These are not recommendations or judgements.

Why do some Twitter followings grow faster than others?

We analyzed the Twitter accounts of 300 bloggers and marketers to discover what actually correlates with follower growth. We used Follower Wonk to check the number of followers, number of tweets per week, total tweets over time and the likelihood of retweets.

Each of these correlates with follower growth at different rates. The findings might surprise you. Here’s the data. 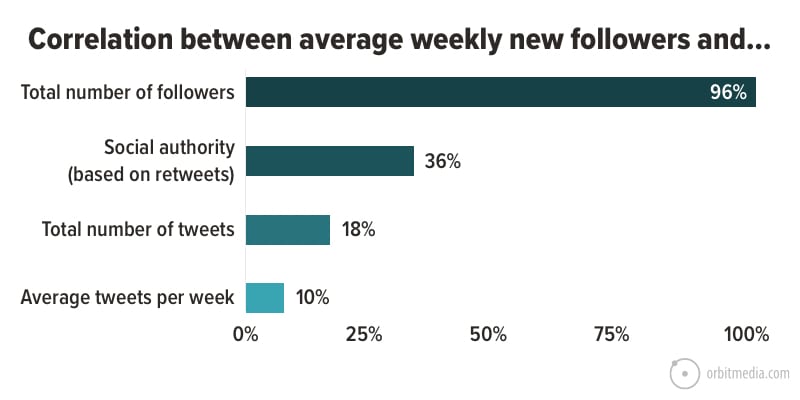 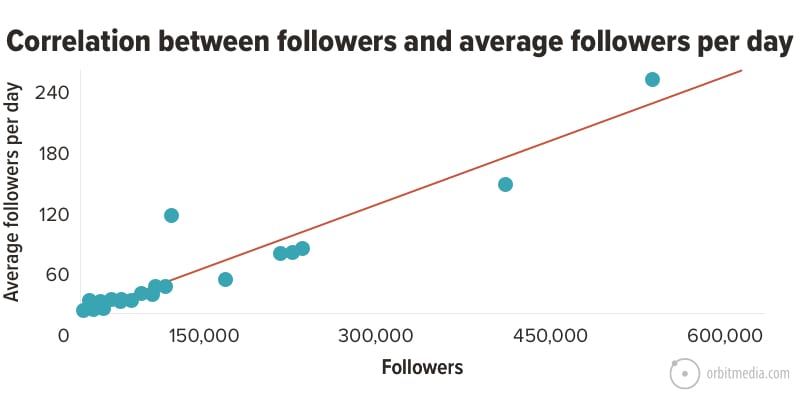 Why do the big accounts grow faster?

It’s partly due to the design of Twitter. From the moment you set up a Twitter account, it starts recommending accounts with large followings. It promotes these accounts in many places and ways.

And then of course, there’s the bandwagon effect, aka the conformity bias. A lot of followers? It’s gotta be good!

A large following is social proof. It’s evidence of legitimacy, even if that following is not an engaged audience. Even if a large percentage are fake.

No one checks for fake followers before clicking the follow button, right?

Regardless of the reason, it’s clear that big accounts grow faster.

So it’s a chicken and egg problem. The key to getting more followers is to have a large Twitter following. But how do you get followers in the first place?

Here are ten ways to grow your Twitter following, from sketchy and spammy to human and high-touch.

Some of them will notice you, check you out and follow you back.

This is the most common way to inflate a following fast. It explains why a lot of random people may be engaging with you on Twitter.

These two activities, following and favoriting others, will gradually grow your account, but it’s slow …unless you automate it with a robot. Here are two tools for automating Twitter activity, so you can do social media without actually being social!

Note: We don’t use these tools. We aren’t recommending them. We are simply explaining one type of social media automation.

That last one keeps your following / followers ratio in balance. So your account looks less spammy.

But these accounts are still easy to spot: lots of followers, the followers and following numbers are almost the same …and often and there are very few tweets.

Your robot and their robot can be friends!

Of course, these tools will win you a mostly irrelevant, unengaged following. Not very social, but hey, it was easy, right?

Rather than use a robot, you can do it by hand.

If the manual approach gets boring, you can find someone on Fiverr to do it for you. 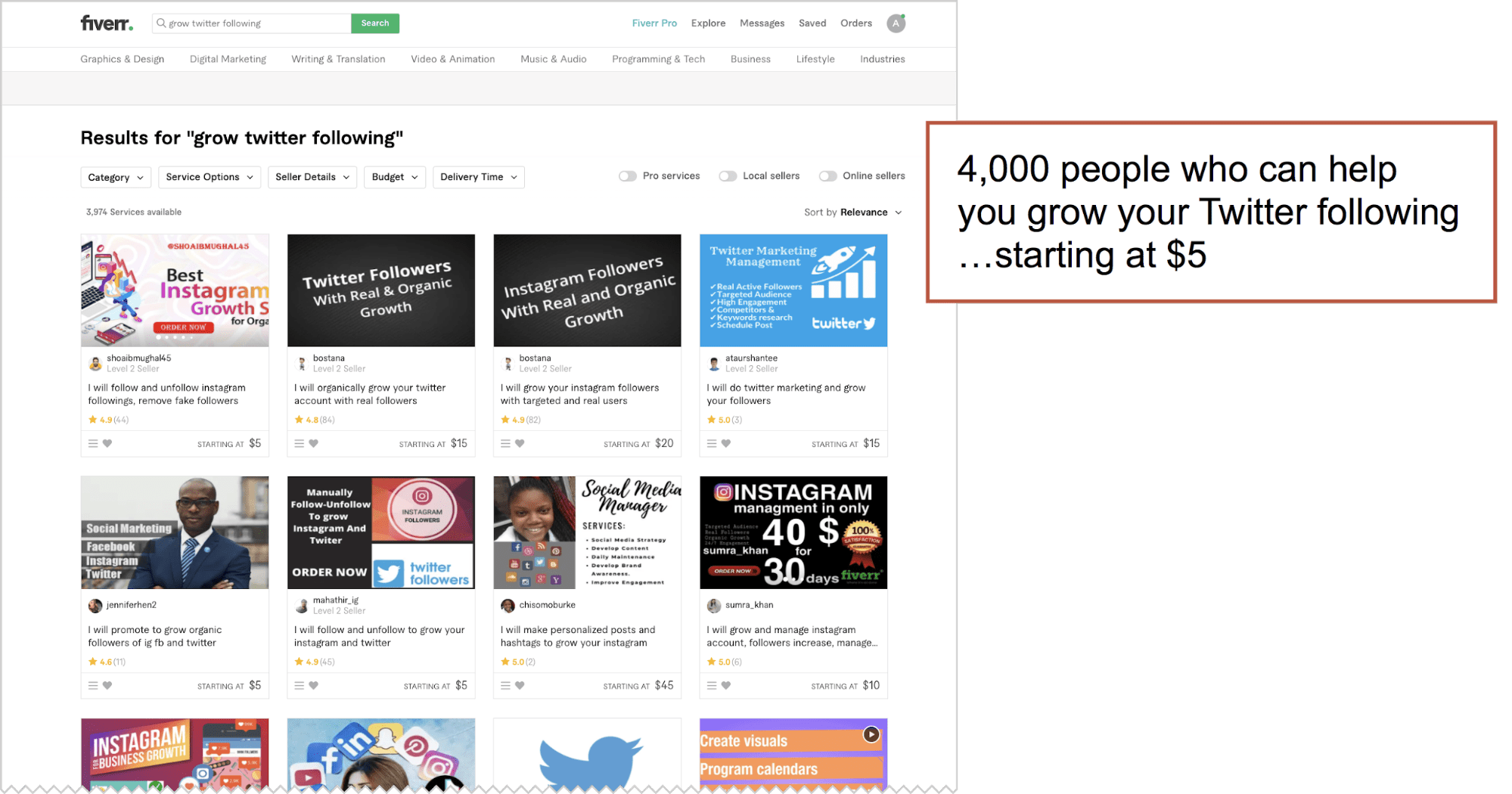 Here’s a way to create artificial fame. Use your new autofollow/followback robots to build up a large following of maybe 100k+ accounts. Then, on a sunny morning… unfollow everyone!

Now, at a glance, you’ll appear to be loved by thousands …but you are quite picky about who you follow. You must be a rockstar. Put a velvet rope around your phone.

That’s the sketchy way to get 100k followers but only follow 10 people. Sure, you’ll hurt some feelings, but pseudo-celebrity has its price.

Interesting read: Chris Brogan (legitimate influencer and thought leader) did this back in 2011, partly as an experiment and partly to reduce direct message spam. He wrote about his experience here.

Now let’s move on to some more legitimate ways to grow a Twitter following.

You’re trying to be more visible. To stand out. They won’t follow you if they don’t notice you.

These are our best tips for social media profile pictures. Here’s a quick summary for visibility in Twitter, where competition for attention is fierce:

Put those together and you have a hierarchy for visual prominence in Twitter profile pictures. The profile pics at the top stand out much more, don’t they? 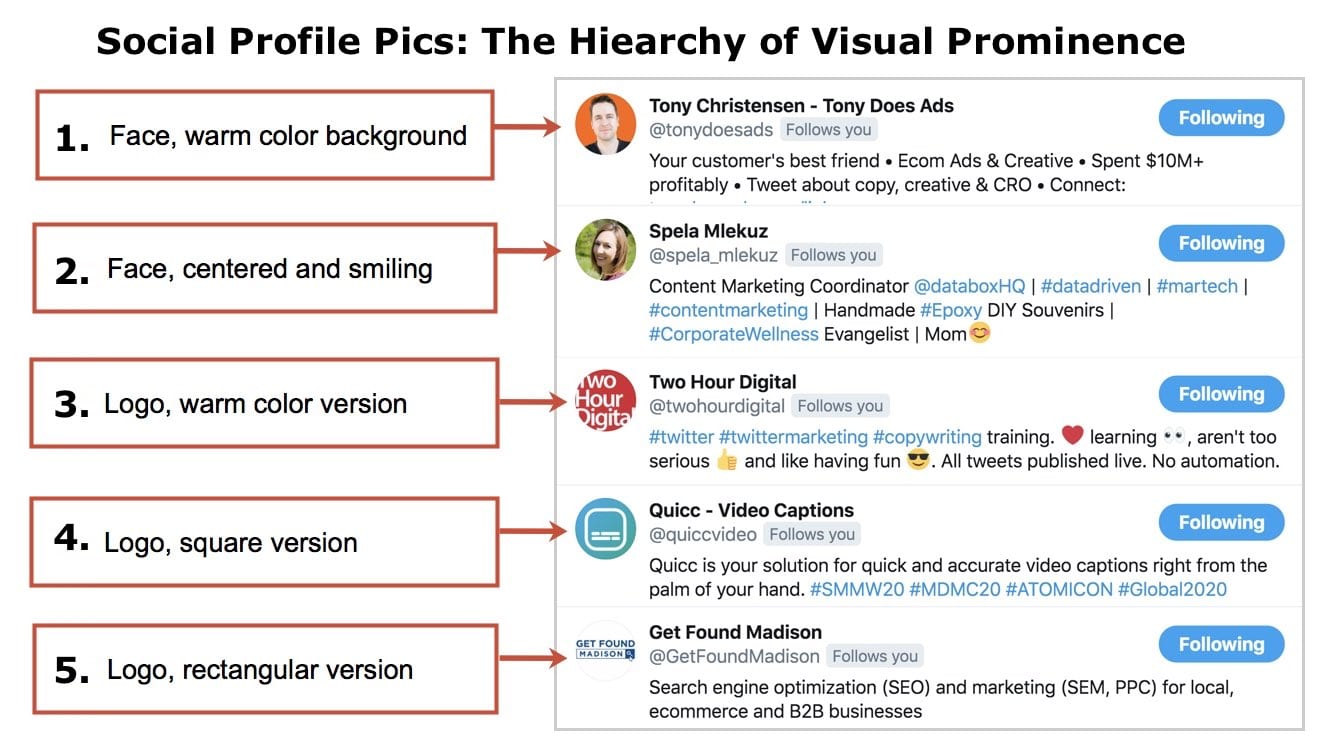 Once you’ve got your profile picture optimized for visual prominence, work on your header image. Make it non-boring. That means interesting, clever, unexpected, helpful or funny. And make sure it looks professional.

A lot of Twitter bios are just “About Us” content. That’s fine. But boring, maybe. Here are three ways to write a bio that grows your following:

Make your bio a call to action.

Some Twitter bios actually give people a reason to follow you. It tells them specifically what they’re going to get. Names the topics while adding a little credibility. A Twitter bio can be a little CTA.

Another reason to write a descriptive bio is SEO. You can optimize your bio, making it more likely to appear in Twitter searches, by adding relevant keywords. Make sure a few keyphrases are in there. And make sure to add your city, if possible.

Twitter is still a research tool for a lot of users. Imagine you’re a prospect or journalist, looking for you. How do you search? What do you find?

Avoid hashtags in your bio.

For this, I have no evidence or research. But I do have common sense. Hashtags within bios aren’t likely to help your bio get found. They are really just little opportunities to leave your bio page. They’re actually competing with the follow button.

I’m all in for a hashtag (maybe two) on a tweet. But this isn’t a social post, it’s your bio. Hold the hashtags, please.

6. Find your top performing tweets and post them again

Some of your social posts are 10x and 100x as engaging as the others. They get exponentially more likes, shares and comments, so these posts are 100x more effective at making your account visible.

If you’re actively watching the streams, you know which posts get engagement.

If you schedule your tweets using a tool like Hootsuite or Buffer, check the analytics.

You’ll probably find that a lot of the most engaging posts don’t even include links. They are sometimes just little tips or inspirational quotes

Keep tweeting these. Keep ‘em in rotation. And pin the best one to the top of your stream.

Now that you’re using data to decide what to share, this next tip will have huge value: increase your frequency.

Whatever your frequency was, double it.

There is no upper limit (that I know of) for how often to tweet. I know one marketer who tweets every 15 minutes. I know the guy. He has a huge following (500K+) and I asked him about frequency. He told me his goal is website traffic and that after testing, he learned that more is better.

Of course, you can’t spend all day manually tweeting. You’ll need a tool to automate these social media posts. Just turn up the dial and schedule more posts for more often.

When you share something, whether you wrote it or not, share it with people who will love it. Twitter is a great way to find people with extremely specific interests.

If you wrote a post about personal branding, mention people with “personal branding” in their bio. They’ll likely thank you for it! They’re very likely to share it and follow you back. 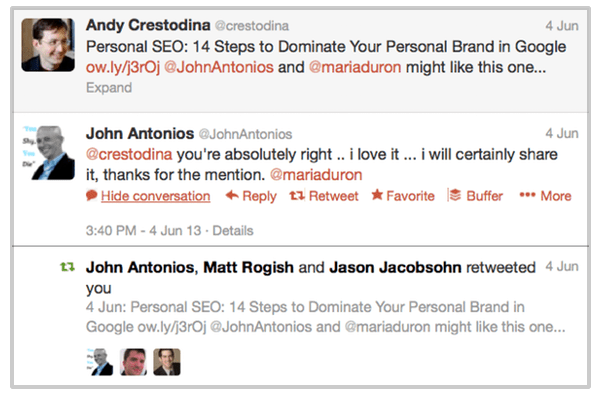 10. Connect with your friends from other networks

As you use other networks, keep Twitter open and in mind. Enjoying a conversation on another social media platform? Take a minute to find them on Twitter. There’s a good chance they’ll be happy to connect.

These will likely be high quality connections, since they’re people you already interact with.

If they shared something of yours on another network, share it on Twitter, but mention them thanking them for sharing it earlier. They’ll be notified of the mention and they’re likely to share again (and follow you) when they see it on Twitter. 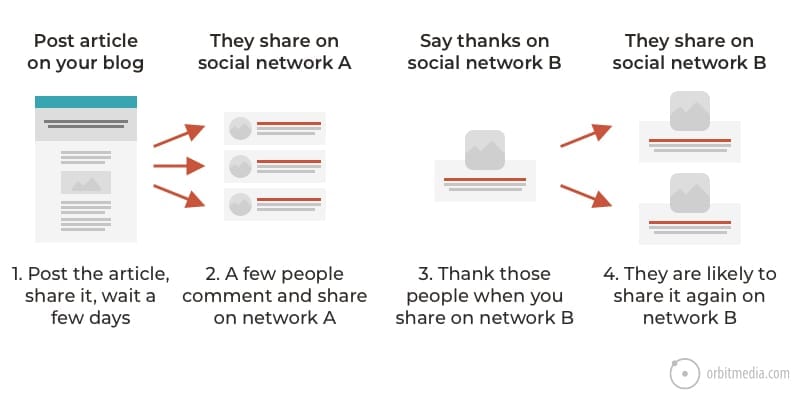 This builds stronger connections to more relevant connections, the ones that matter most in the end.

Ask yourself: Why do you want a big following anyway?

Would the world be a better place if you have 100k followers? Would it really help your business? Your career? Your personal life?

Large Twitter followings are not usually very engaged audiences. And remember, organic reach in social media is low (likely only 2% of followers see anything you post in their stream).

A large following in Twitter is worth less than other platforms. Here is the cost-per-post in paid influencer marketing. Only Facebook is lower. 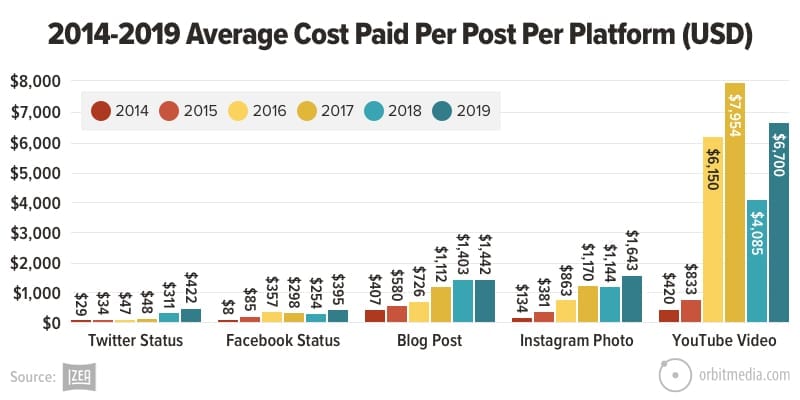 So why the obsession?

But the most visible metrics aren’t always the most important. In fact, the easier a metric is to see , the less impact it has on your business. We call that “Julian’s Law.”

If there are upsides to having a large Twitter following, they fall into a few categories. Each has their own factors in success.

But the real benefits of Twitter (and of all social media and the internet as a whole) is the connections between people. It’s a powerful tool for research and networking, PR and influencer marketing. On Twitter, you can find almost anyone you can imagine and start a conversation.

Let’s close on a great quote from Ted Ruben:

“Make your social connections count or they won’t be worth counting.”