Headed back into the office soon?

Staying in your home office forever?

Some marketers are podcasters and YouTubers. Naturally, their desks are mini-studios. But like it or not, with this much remote facetime, we’re all working in mini-studios now. Maybe it’s time to upgrade.

“Hey your picture is amazing. What camera are you using?”

We reached out to a bunch of marketers to answer that question. We’ve included the list of gear for each in case you’d like to emulate their setup. A few things you’ll notice:

Ready? Let’s peek into the homes and offices of some of the truly great marketers…

We’ll start with Tamsen, partly because her setup features the big DSLR camera upgrade. When you see her videos, you’d think she has a production team and $100k in equipment.

She does it all with a very minimal setup. Everything is foldable and portable. It needs to be. Tamsen’s “desk” is also the dining room table. 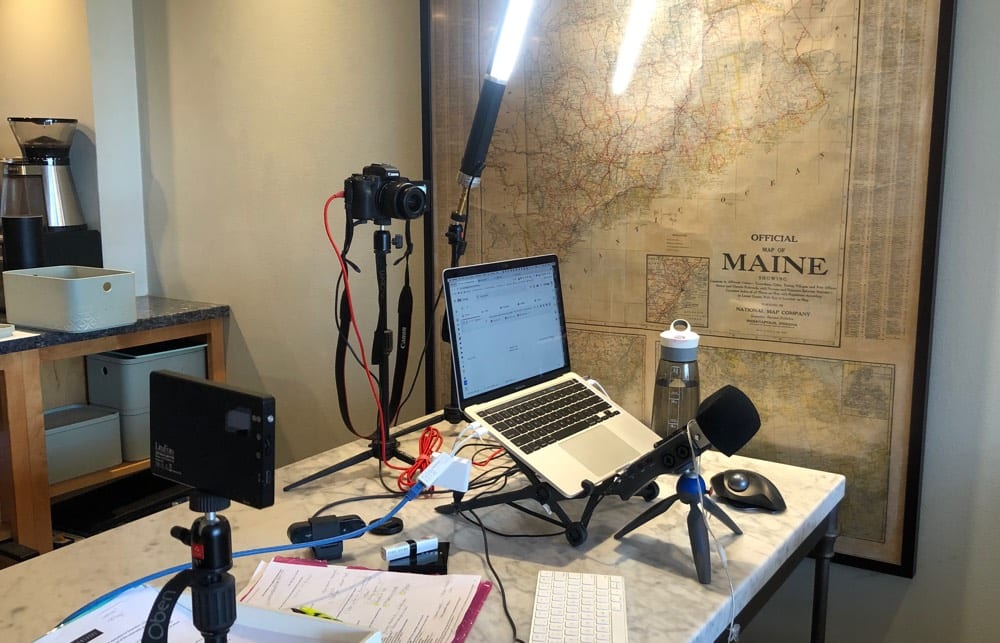 Just look at the difference a DSLR, cam link and lights can make. Here’s what Tamsen looks like on camera. This is A+ production quality shot with $800 of equipment from a dining room table. 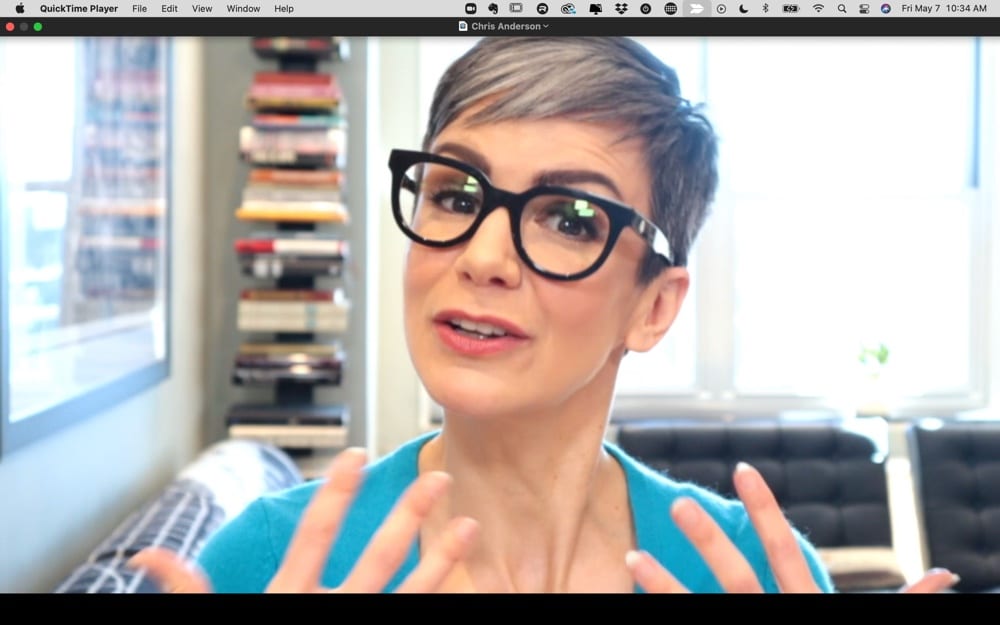 Big reach from a little house. Ann famously works in a tiny house in her own backyard.

It’s from this little desk that Ann drives content for MarketingProfs, developers blockbuster keynotes and writes her beloved fortnightly newsletter, Total Annarchy. That’s the keyboard where it was written, that article that both pushed your thinking and warmed your heart. 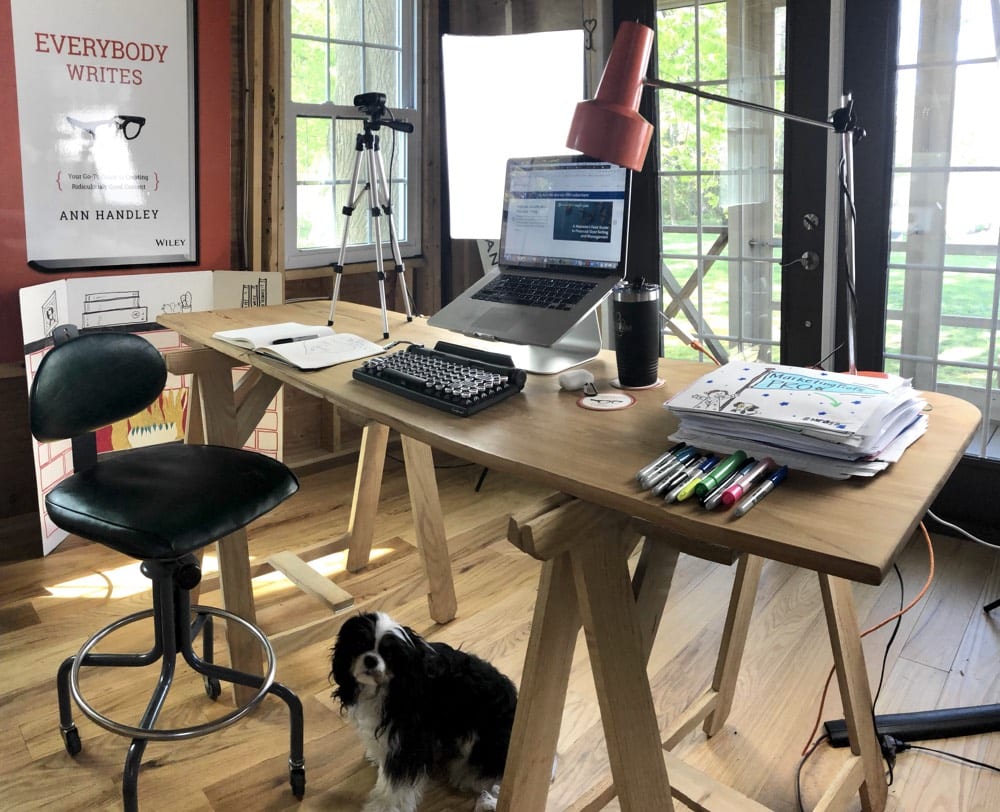 Yes, the picture quality and lighting are amazing. But this writer’s space isn’t just about words and pixels.

Look around. Many of the objects have history and meaning.

To think, this is where she does it. The business impact, the deep insights discovered and shared, the lessons learned and passed along to millions. It all happens right here.

Jo apologized for the mess, but this rates as a super clean in my book. She’s running with the built-in mac camera, but she’s got nice lights. Takeaway: lighting is more important than the camera. 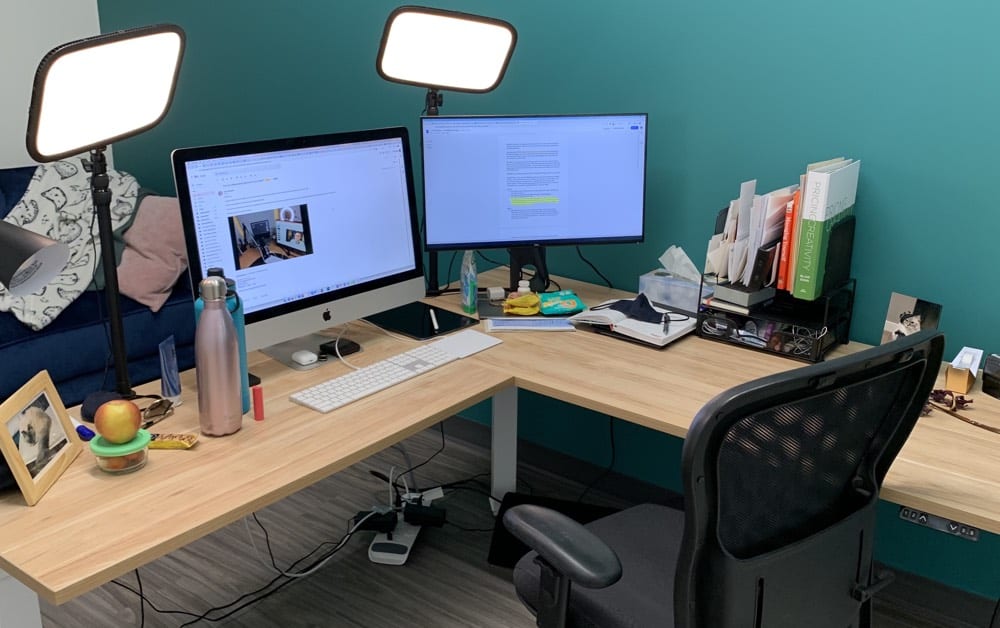 Gini gave up the office lease 10 years before Covid was a word. The idea was to “hire the very best people for the job, no matter where in the world they live.” So she’s a home office pro.

She’s also a mom to a little girl. This picture is both home office and homeschool.

Building a world-class professional development platform on the left.

Hamsters and homeschooling on the right. (The hamster’s name is Hashbrown.) 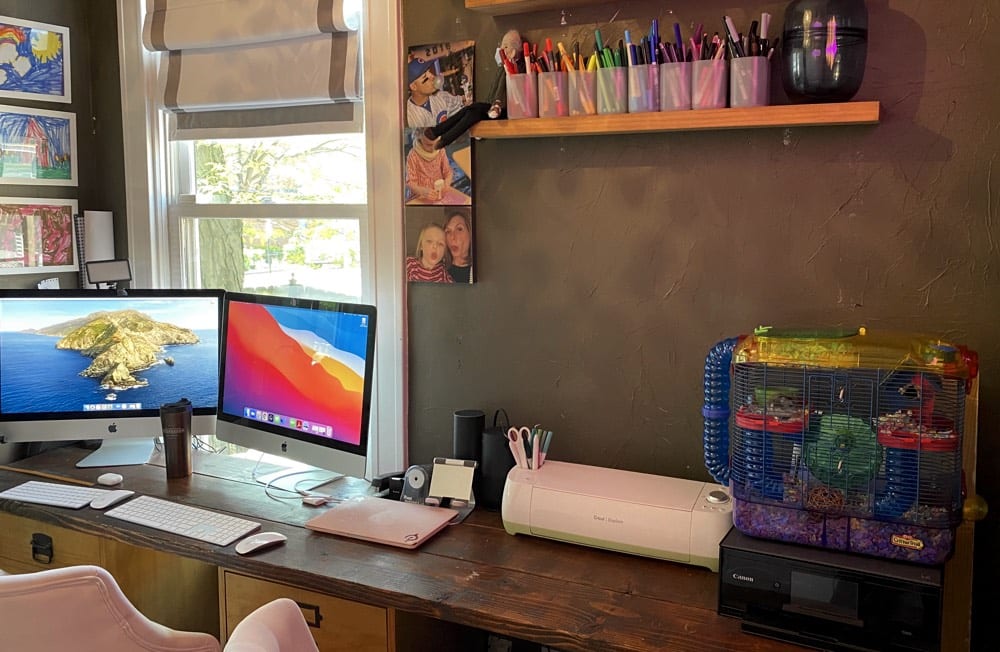 Why the printer, Gini? “Because, when kids learn from home, they apparently need to do work on actual paper, so this a new addition since March of last year.”

The rest of the room is just as colorful and creative. Gini tells me I need some of these Nanoleaf light panels. I agree.

My good friend D Fish is keeping it real.

“I was sharing a ‘home office’ in a two bedroom condo with a wife who was also working from home and a 1-year-old.  So I actually had three office desks: the one in my old office/son’s nursery, the living room, and sometimes a (mostly-deserted) co-working space.” 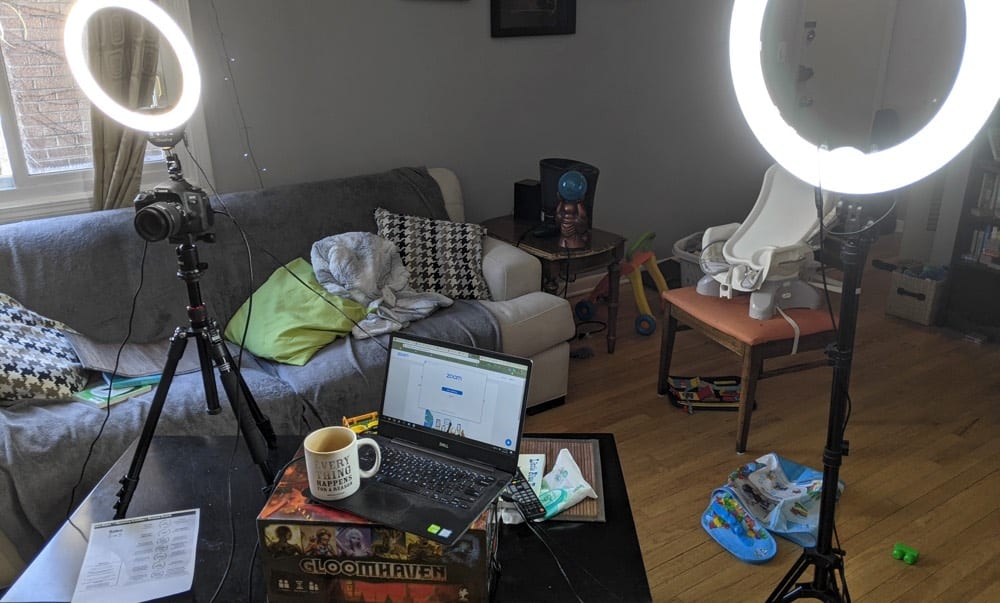 Robert was the first person to explain the DSLR-as-webcam difference to me. He’s a production pro, which makes sense. He does tons of virtual conferences and he’s a musician with recording studio experience.

For Robert, building out his setup thas been “a year long adventure.” It looks finished to me. 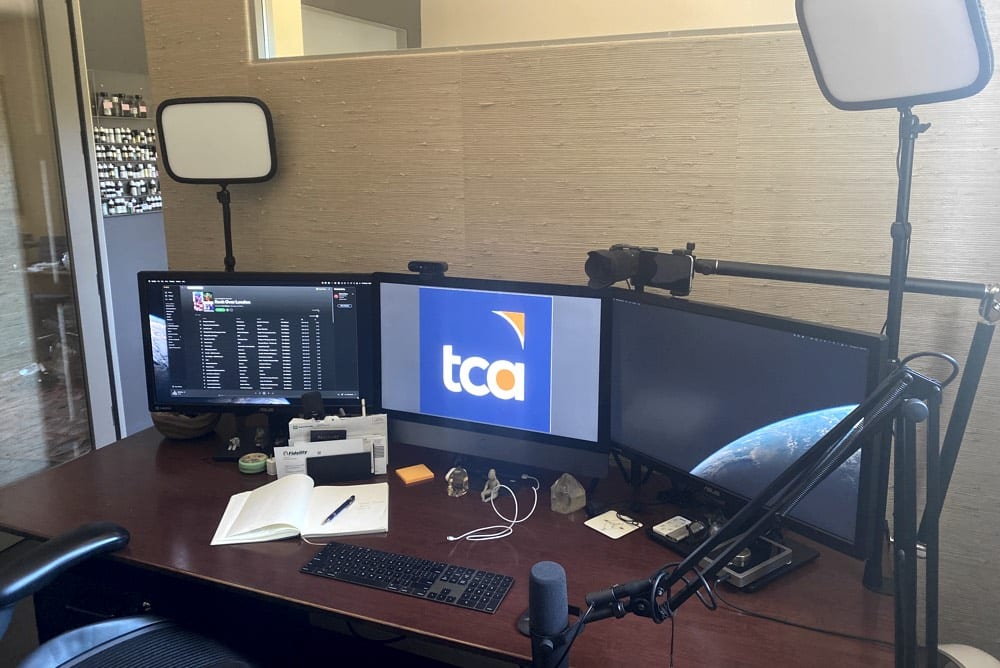 What’s a barlor? I asked. “A barlor is like a parlor where drinking is prevalent.” In Joe’s case, a lot of high-quality, long-form content is also prevalent.

Joe’s currently working on the updated Content Inc. book launch. Think of it. Best-selling books get written at desks like this one. 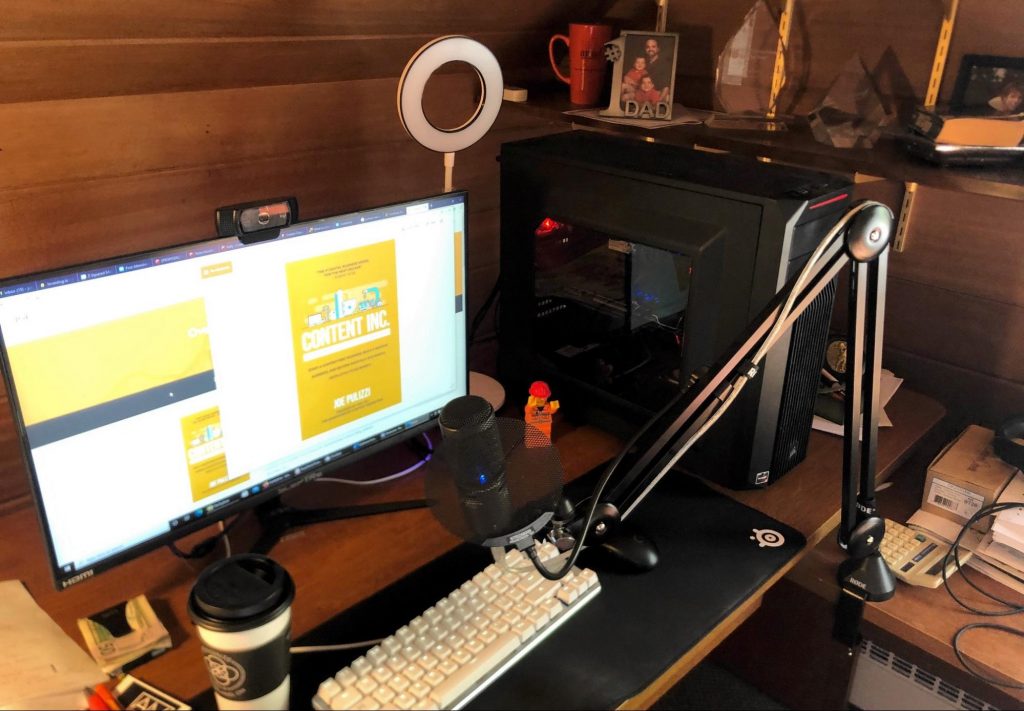 No laptop? He uses a custom computer his sons built for him.

Is that a calculator? I love you, Joe. Gen X forever!

Unfair! When your background is in TV production, you learn a bit about how to set up a studio. Drew’s space is a masterpiece.

He switches between cameras at the touch of a button. Drew gives you a bird’s eye view while he sketches on paper, the click! He’s making perfect eye contact by using a teleprompter. Great lighting, great sound. But don’t turn on that ceiling fan, Drew! 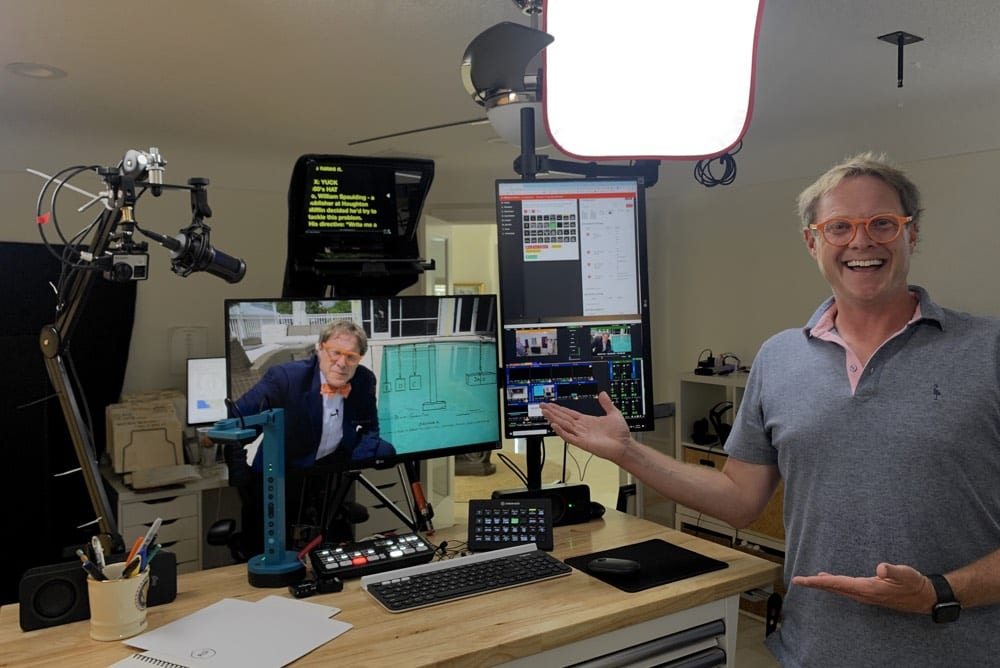 1000 hours of frustration, testing, and rehearsing…

“Watch what the live streamers are doing” This advice from Mitch stuck with me. He’s right. The gamers are way out in front with their setups. Mitch is right there with them.

The Elgato Stream Deck is that colorful box on the right. It lets Mitch quickly switch between scenes and launch media with the touch of a customized button. 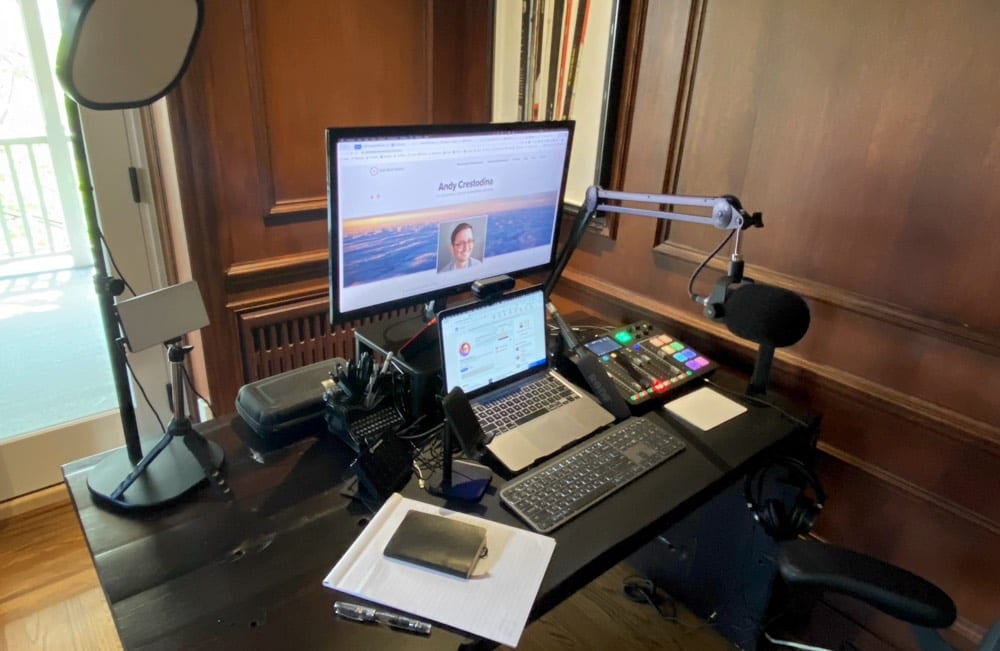 Jeff has it dialed in. Come Alive produces podcasts for clients with exquisite attention to detail. Clearly, that’s reflected in the space. When your life is audio, who needs lights? Why hang stuff on the wall?

Clean but not sterile. There is a plant in that window. 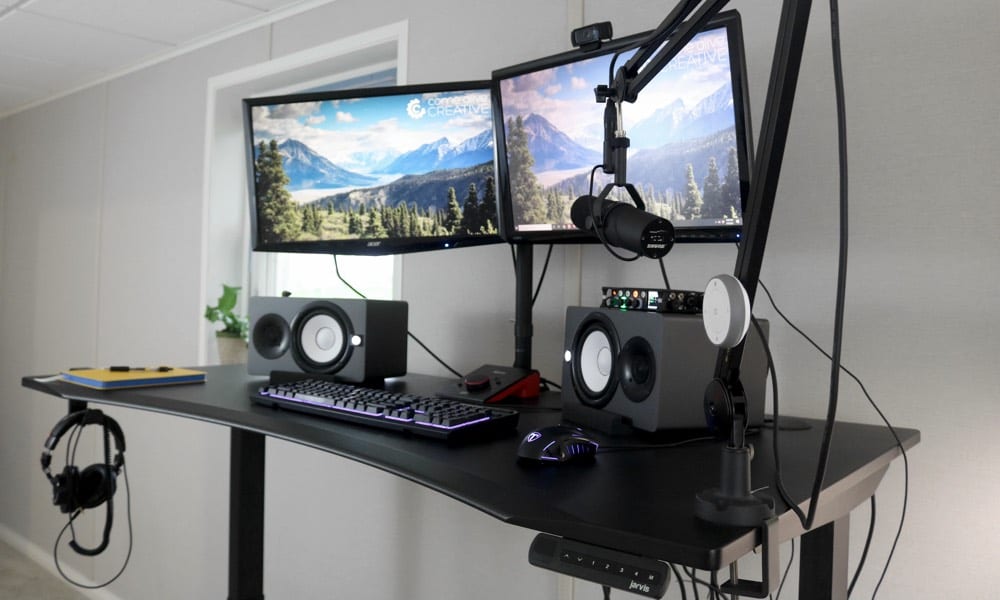 Jeff gets asked for equipment recommendations so often that he’s put it into this post: Podcasting Equipment. Here are the highlights:

A clean mix of digital and analog, plenty of natural light and a comfy chair. It’s easy for me to imagine great work happening here. It’s powered by a Mac Mini. No laptop, no lights.

April is an author, speaker and positioning expert. From that chair, she reframes the conversations about her clients. 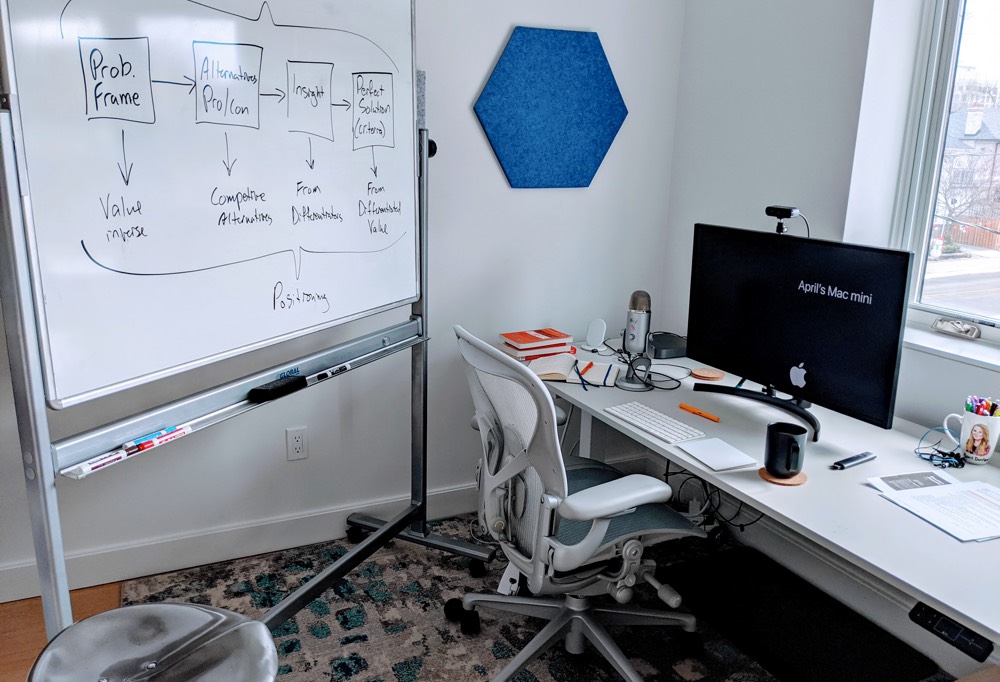 April gives us a mini-tour:

Where can I get one, April?

Julian’s simple, unscripted style makes Analytics look easy. Obviously, he’s invested a lot of time in building up those skills. He’s also invested in his video setup. I always wondered what it looked like.

Julian is using a teleprompter for perfect eye contact. He’s also using a switcher, so with one tap, he can switch between setups. This is a complete setup for the pro-YouTuber. 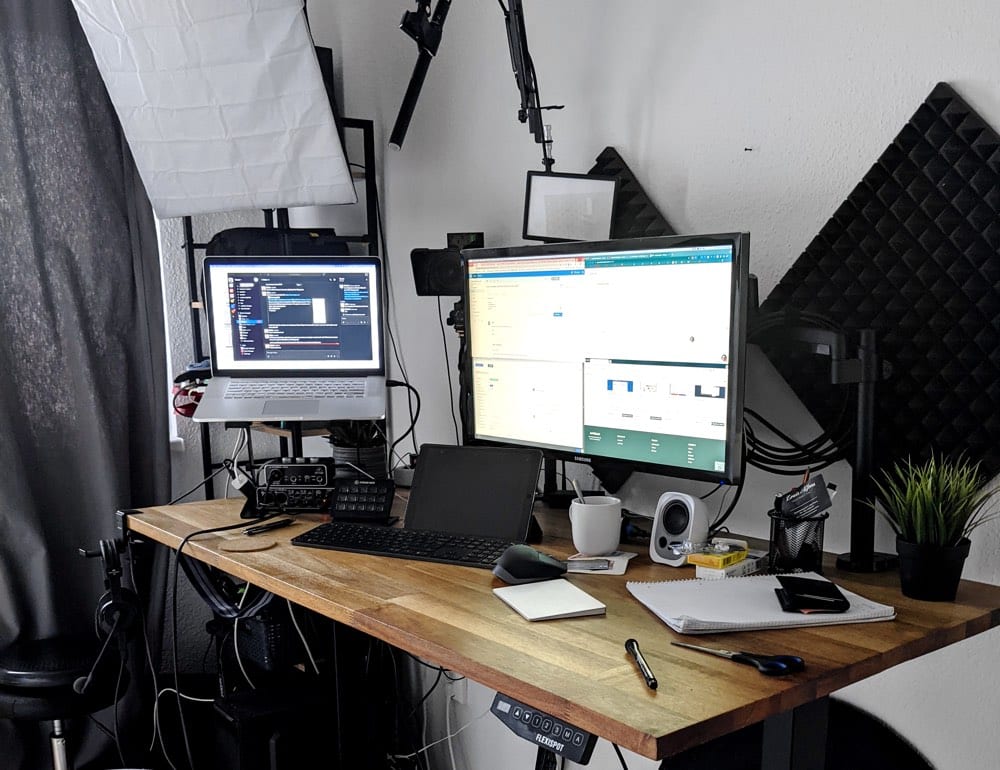 We are in Talia’s home office. This view is beautiful, overlooking a garden of olive trees.

Talia is a speaker, writer, consultant and conversion optimization expert. I picture her sitting here, Zen-like, clearing her mind of all distractions …then writing a call to action that triggers the unconscious biases of thousands of visitors. 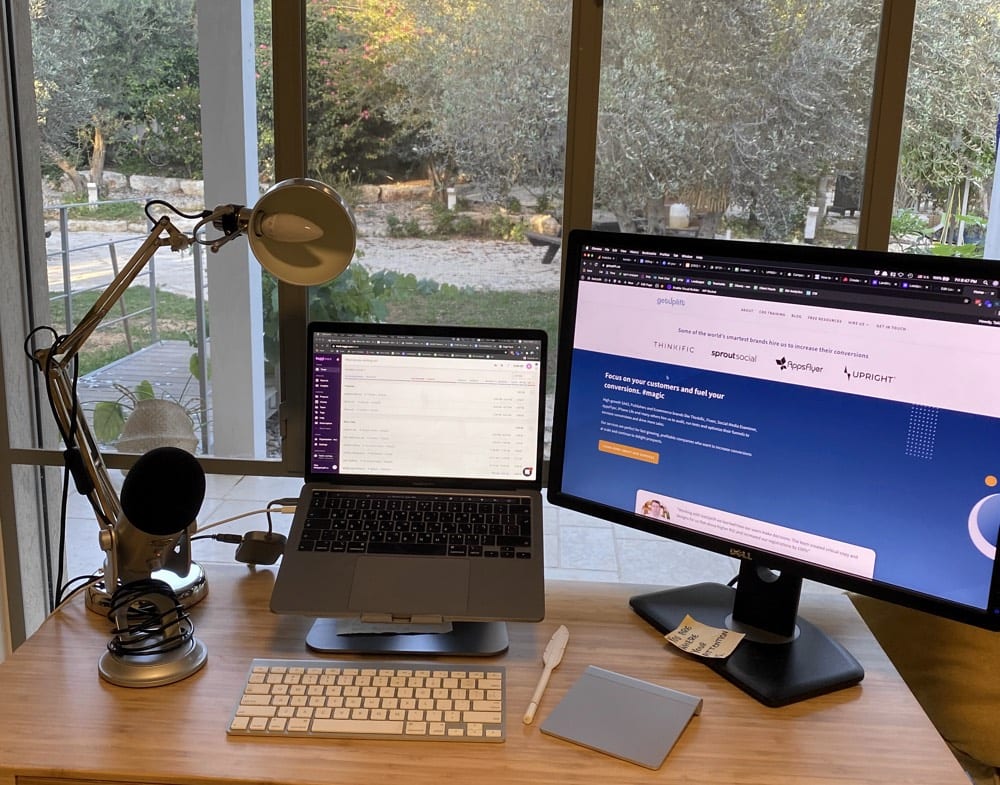 The setup is simple and compact, but with a nice external mic. She does have another office with a lot more gear.

Rand is building an audience intelligence tool that instantly shows where your prospects spend their time …from inside this tiny house. Webinars and interviews, writing and research, Rand reaches millions from that keyboard, that lens.

His setup is almost identical to mine: Sony camera, cam link and mic. 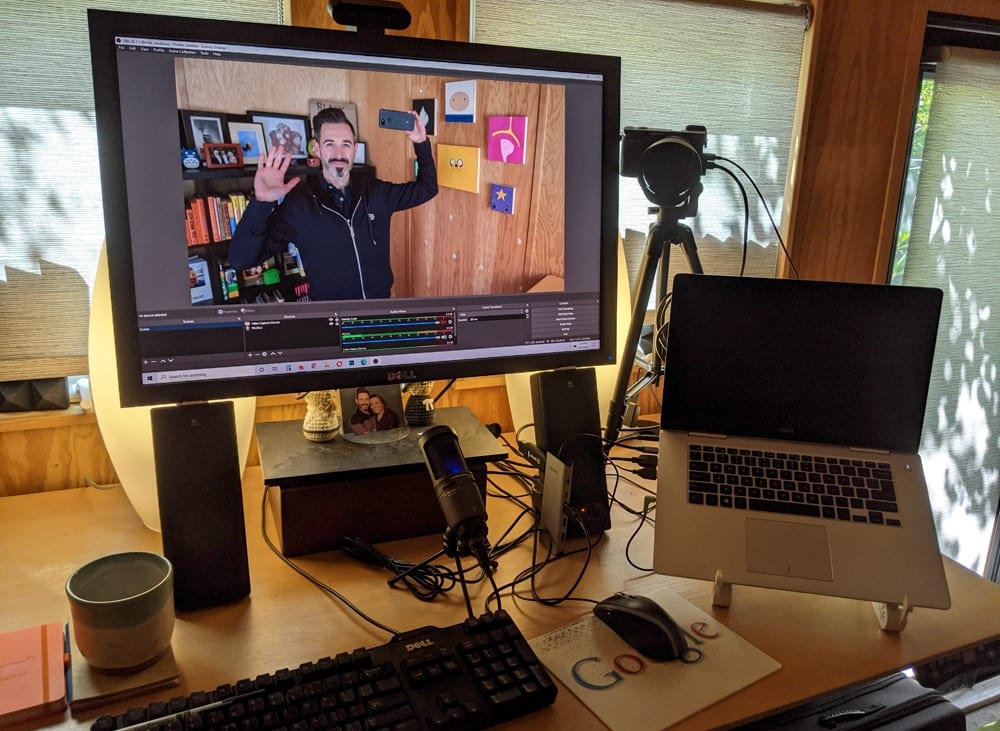 Nadya doesn’t have a lot of gear, but it’s enough. She dominates her category through strategic focus and creative talent. Thanks for sharing, Nadya. 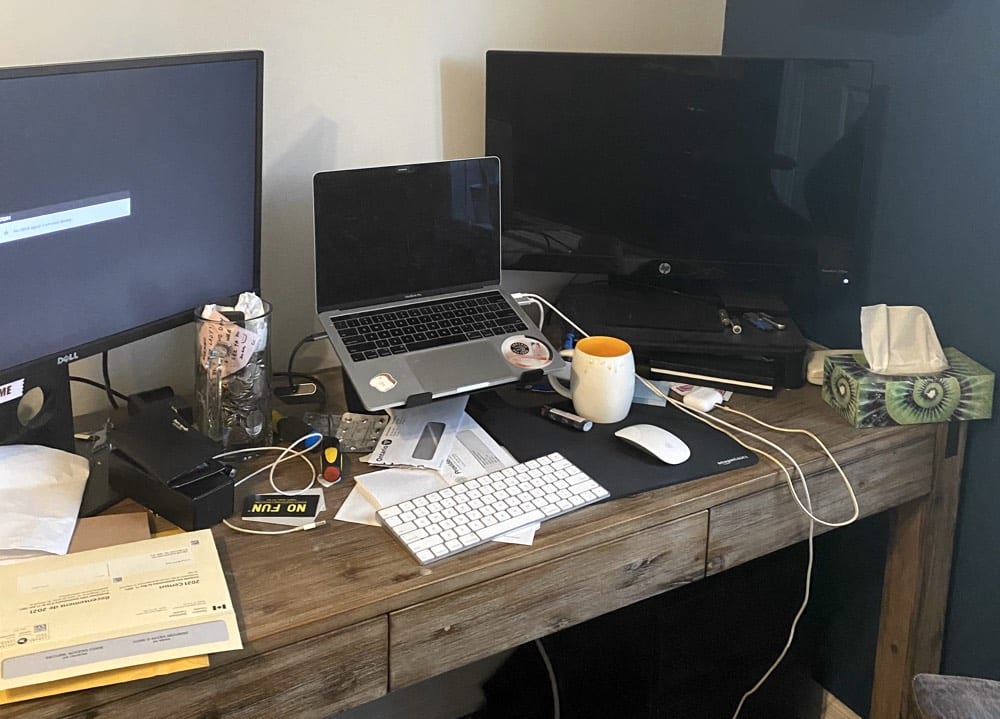 Look closely. It might seem simple, but this is a serious studio. Three cameras, two mics, big lights. Jay has made some upgrades during quarantine.

But he would also be the first to tell you that the gear isn’t what matters most. His words: “It’s the wizard, not the wand.” 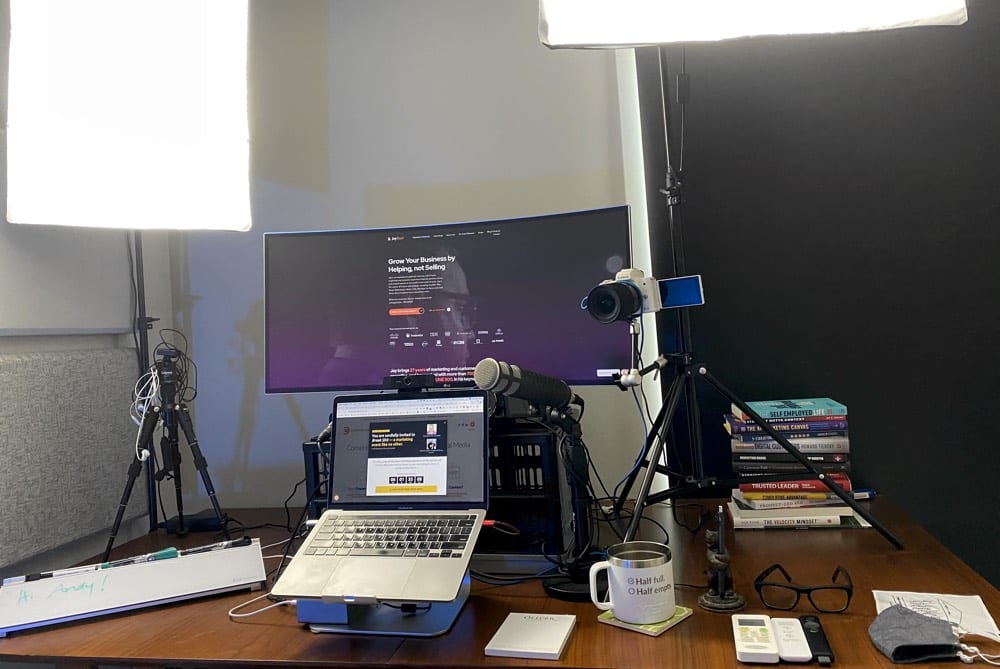 This is a masterpiece. Marie is a pro YouTuber. We can learn a lot from the decisions she’s made here. 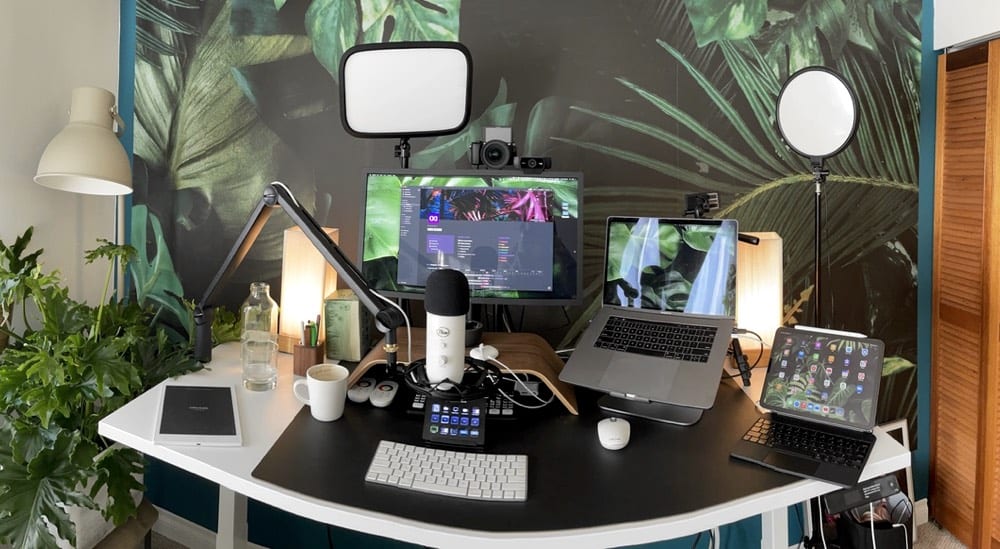 Not surprisingly, when viewers see the quality of her videos, they ask about her setup. She’s posted all of the details here. Helpfully, she also lists the starter versions of each item. Baby steps, right?

“My hardware when in use will increase the temperature in the room by 10 degrees. I have fans all over the place directing hot air out and cold air in.”

Jeff is an expert marketer and software engineer. He’s also good at building hardware, such as micro-device controllers. What’s next for Jeff? Farming. Yup! He’s building a farm. Probably, he’ll control it from one of these screens. 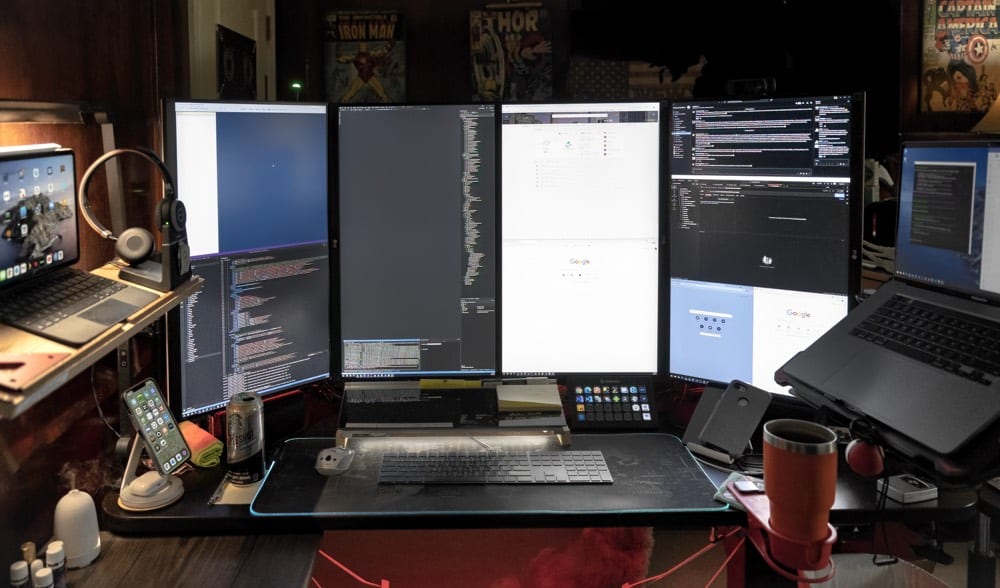 Who needs multiple monitors? Just get the drive-in theater-sized screen and partition it! 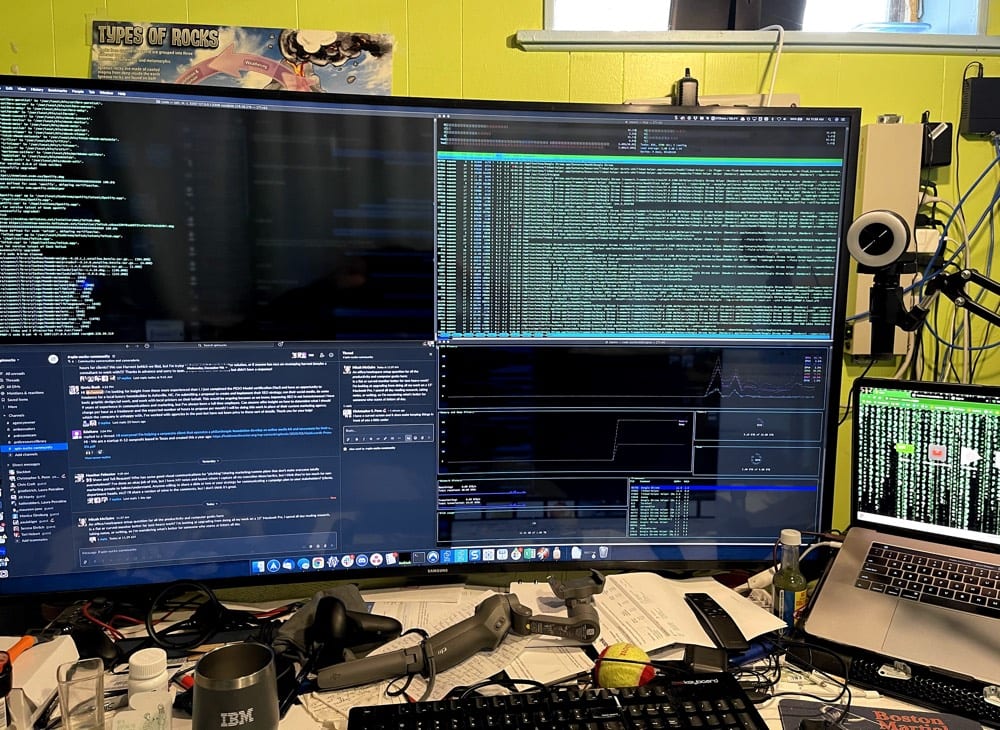 Chris has some unusual items on his list of office equipment:

Clearly the desk of a high-energy podcaster. Joe hosts The Pop-Marketing Podcast.

This is another non-laptop workstation, but Joe keeps his projects on a pocket-sized external drive. “It’s super tiny, super-fast and can quickly move projects around once travel becomes a thing again” 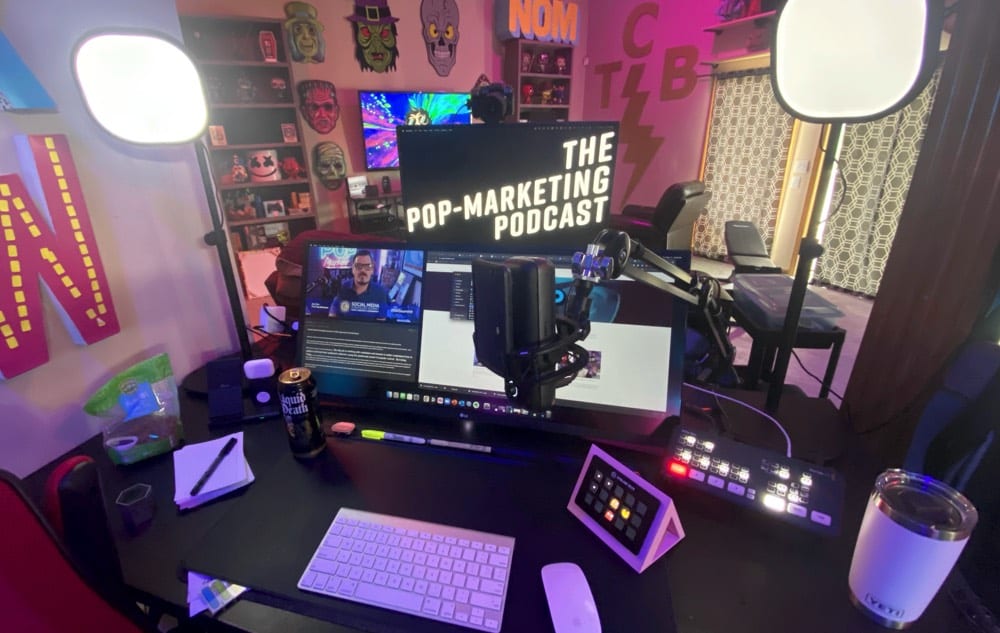 Katie is a marketer, live streamer, host, speaker and filmmaker. (Book her here!)

Here’s where the magic happens. From this home studio, she streams using Socialive, does interviews, hosts shows and films news appearances.

“I’ve been doing a lot of livestreaming on social channels during the pandemic as many turned to sites like LinkedIn and Twitter to stay connected with each other and new ideas. One such infotainment show is Experience TV with Oracle Customer Experience.” 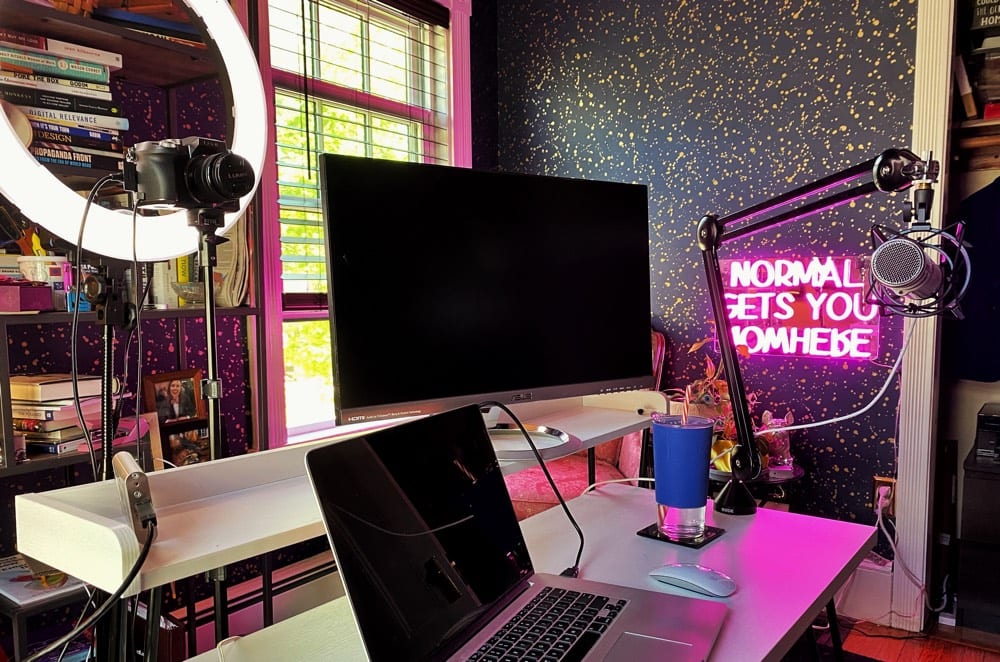 Benyamin Elias’s “Marketing in the key of C”

This is a relatively new setup since Benyamin recently moved to Portland, Maine. He has natural light, nice microphone …and a piano. Yes, Benyamin plays requests in meetings. You win, Benyamin! 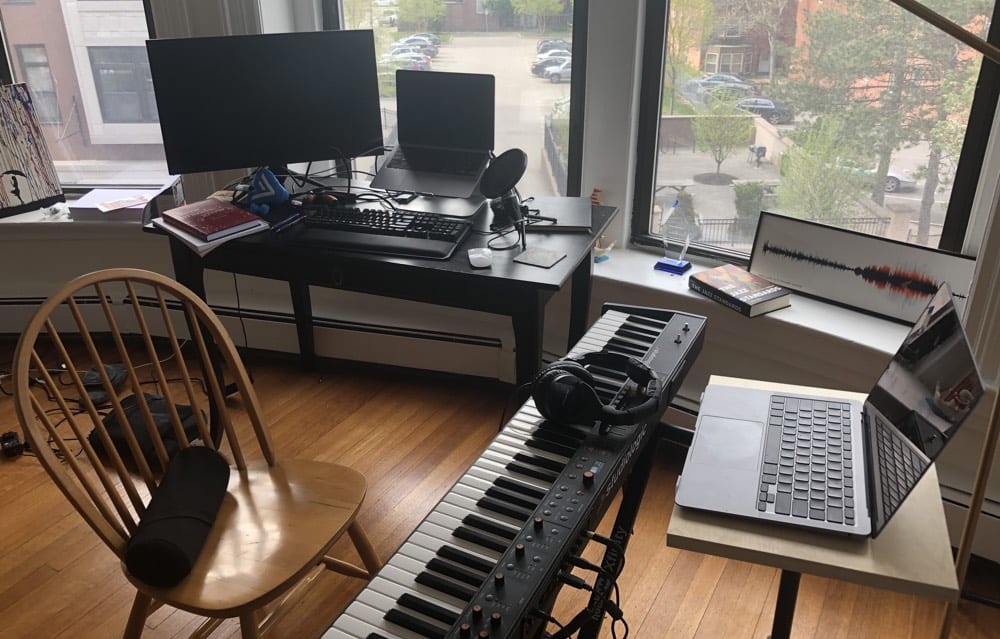 Director of Community and Events, IMPACT+

A lot of people send me email. Stephanie sends me short personal videos. It’s refreshing. I’ve seen the background many times. But what does life look like from her point of view?

Clean, simple and colorful. It’s from this chair that Stephanie produces the high-touch formats and builds all the personal connections. 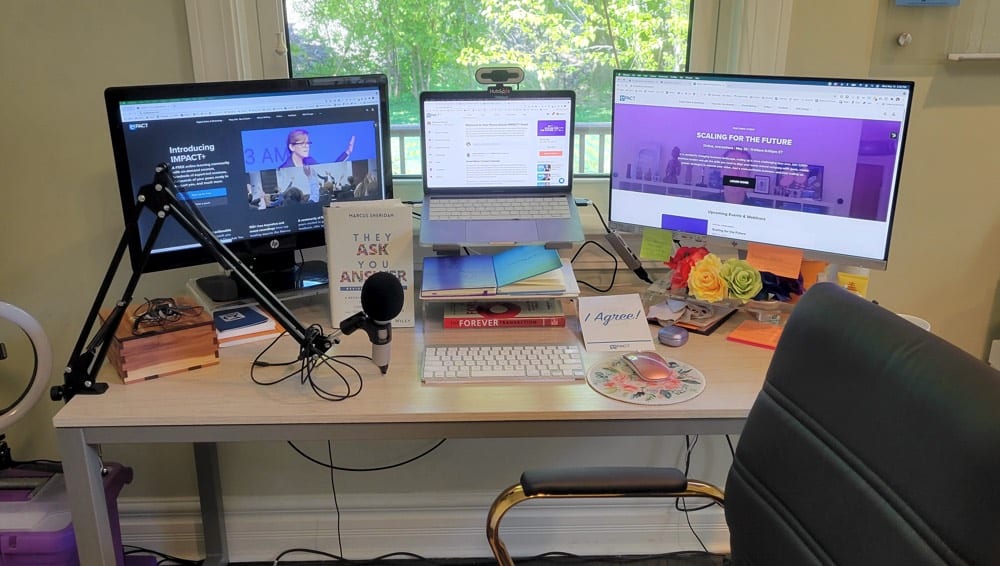 Gear for virtual/video stuff when I’m not using a DSLR:

After 16 years of an office with a lease, Douglas finally gave it up and took his team remote. “Nobody wanted to come into the office for some strange reason…”

It’s from right here that he records one of the top 10 marketing podcasts, posted every Friday for the last 331 weeks. 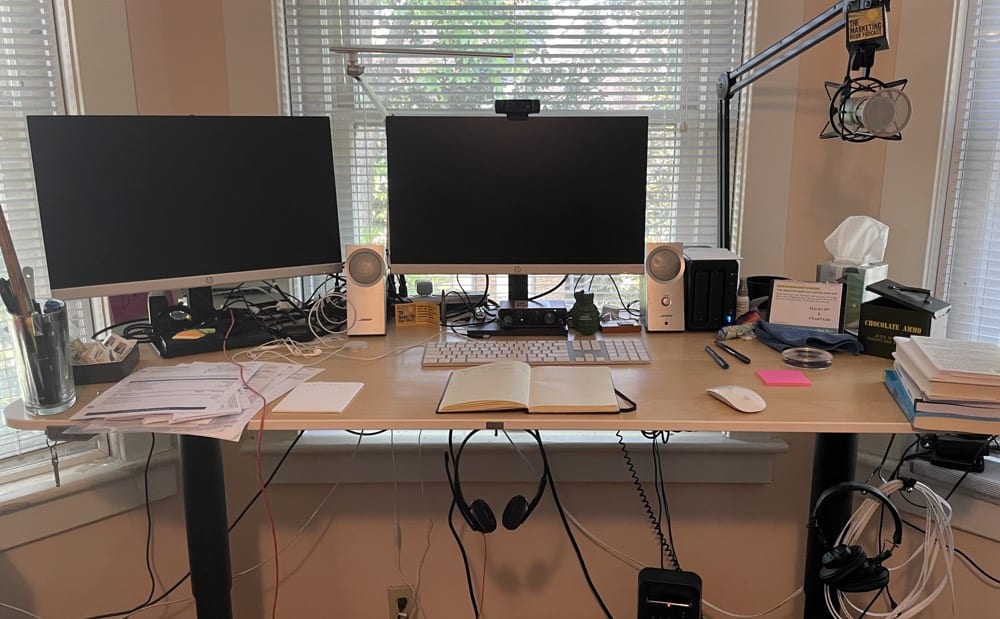 Here’s another non-nonsense, no-laptop home setup and maybe the smallest desk in the bunch. Amanda combines research, visuals, influencer outreach, social media and SEO …all from this little space. 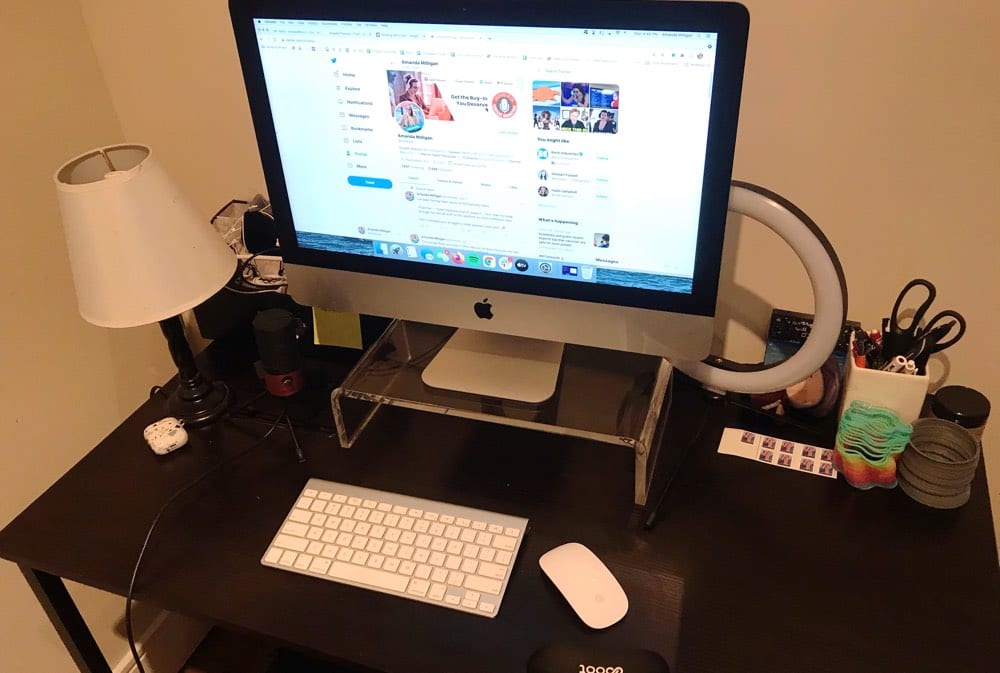 Maybe you don’t need an expensive new camera. Maybe you have a great camera in your pocket.  Here’s how to turn your phone into a studio. Just add mics and lights.

Maria wins for most portable. Except for the light, all of this would fit easily in my bookbag. 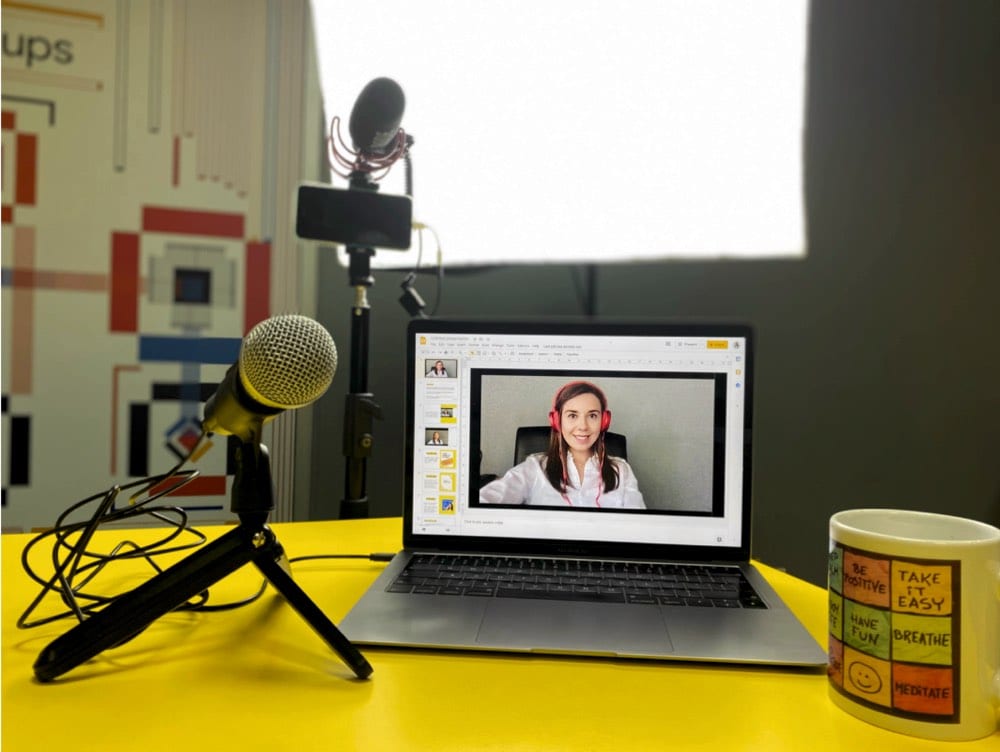 Someone has to check the mail.

I came in every day to this big empty office. I usually didn’t turn on the lights or heat. Just sat in this little room in front of a space heater, cranking away on calls and content.

After upgrading the camera, I doubled down on video content for our YouTube channel (what? You haven’t subscribed yet??). I also did one zillion Zoom calls (I average 6-8 per day). 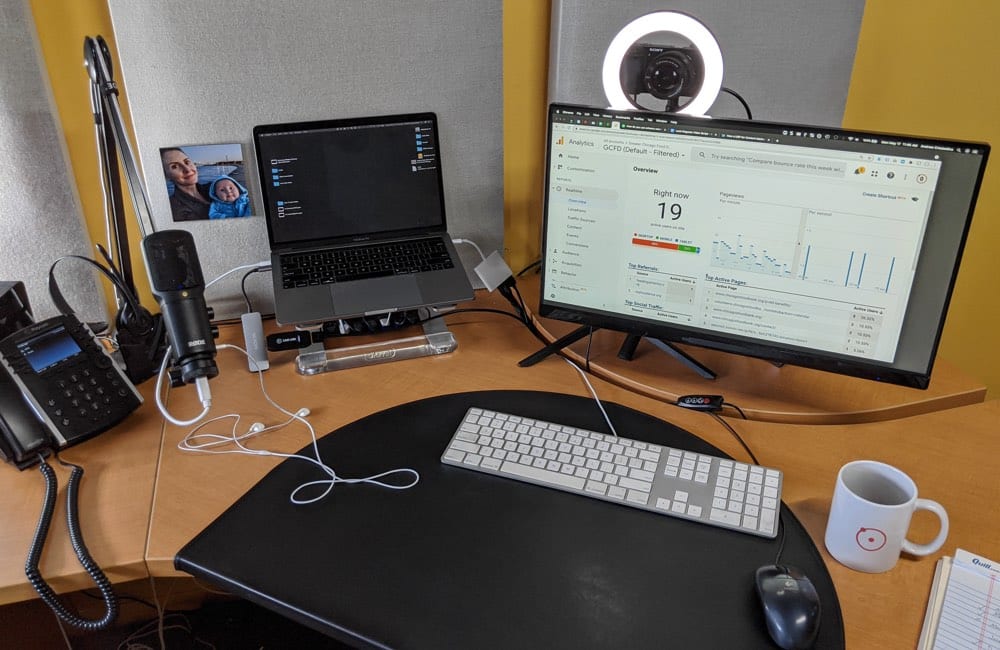 Here’s what I’m working with:

Somehow, that was more personal than I expected…

HUGE THANKS to each of the contributors for letting us into their homes and offices. The original idea was to check out their cameras and mics, but clearly, they shared much more. They shared a view into their personal spaces. Their homes.

There’s a fine line between working at home and living at work.

We spend a lot of time in these places. We hope that this inside look into these corners of the marketing world has given you some ideas for your own space.

ProTip: Think of a format for content that gives you a reason to reach out to old friends, and new potential friends, the people you admire. Collaborate on something fun, easy and creative. You’ll all get a bit of value, even before you press publish.