Hey did you see that Happiness Machine YouTube video by Coke? You know the one where Coke rigged a machine to give away free stuff? You have? Here, watch it again.

You’re back? You’re smiling aren’t you? That video has been watched more than 5 million times. It has, as the kids say, gone viral.

But why?  In this post, I’ll pose a hypothesis that says viral content is all about psychology. You run it through your BS meter. We’ll see what happens.

In high school, I took college-level psychology courses. The only concept I truly remember is Maslow’s Hierarchy of Needs. That and the B.I.T.C.H. test, but that’s a different blog post.

A perennial optimist, psychology professor Abraham Maslow walked on the sunny, rather than the dark side of mental health. He looked at successful people and created a hierarchy of needs, a five-point step ladder to life bliss. Maslow’s hierarchy purported to explain all human motivation.  We turned his theory into a neat colorful pyramid. 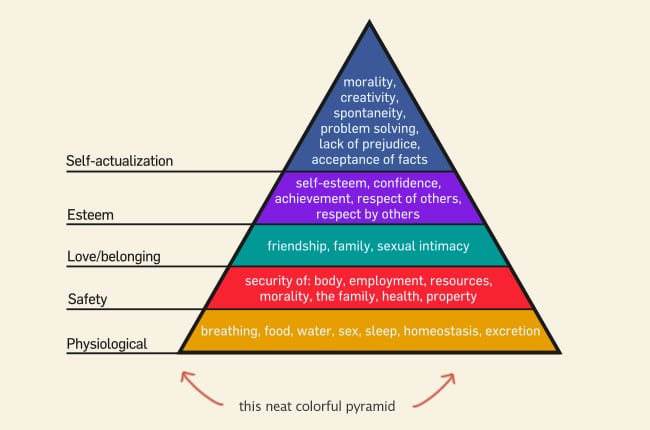 People at the bottom stage are motivated only by the basics: the need for food, shelter or using the bathroom. People at the top stage of self-actualization wax poetic about their love of Adam Smith or Karl Marx.

People in the middle are motivated by their need to belong, find love, acceptance, health, and family. Social media meets these middle needs faster, more efficiently and easier than any other media. Viral content, by extension, meets these middle-stage needs on a universal level.

“Why We Use Facebook,” is the most comprehensive literature review of Facebook users to date. The study by two Boston researchers suggests people use SNS to fulfill those squishy middle needs of belonging and self-identity. The study says we use social networks to:

By extension, we share content that lives within these affirmations. Last year, The New York Times delved into content sharing with a survey of 2,500 “heavy content sharers.” (You can view the PDF here). The study created an entire lexicon around people who share, including a persona named “hipsters.” But if you understand Maslow, you can make your own conclusions about why content is shared.

Content that speaks to these middle human motivations gets shared. It’s really simple. But viral content seems to exponentially hit Maslow’s middle on an epic scale.

With its Happiness Machine video, read how they created the campaign, Coke focused on our psychological need to be happy and matched it with visuals of orchestrated, yet authentic happiness moments. Coke’s video was the opposite of the Edward Bernays-style spin and more like soul-bearing Maslow.  The video sits at the intersection of perception and memory and that, I hypothesize, is why it went viral. Let me explain.

The Coke video is the epitome of what I call, Personal Content Creation. It is content that moves beyond chasing key words and dives into media that deliberately aims at perennial, universal unspoken, human desires. Like Apple, it’s content that gives us what we want, even if we haven’t asked for it. It’s content that’s personal, never business and it resonates with our middle needs. Personal content has a high-level of “viralbility.”

Coke created a video where people were made happy; they offered it up for you to watch. Not every smiling video goes viral. Why this one? Some key points:

Coke played with your heart and you thanked them for it. This isn’t spin. It’s social media content at its finest.

Some other examples of viral psychology in action:

Try building content that explores the universal human needs found in Maslow’s hierarchy of needs. Here are just a few:

What ideas did you come up with?

Ovetta Sampson, is a freelance digital writer for Blue Soda Promo, a promotional marketing company based in the Chicago area. An avid triathlete, she’s still finds time to run her own content marketing firm and blog.

Ovetta Sampson, is a freelance digital writer for Blue Soda Promo, a promotional marketing company based in the Chicago area. An avid triathlete, she's still finds time to run her own content marketing firm and blog.