If you know about BuzzFeed’s founder Jonah Peretti, then you know he’s obsessed with viral content. BuzzFeed, the home of cat memes and stories such as “48 Pictures that Perfectly Capture the ‘90s,” receives 14 million unique visitors per month.

The website has developed its own content analysis software in an effort to figure out why people share content. This year the company acquired Kingfish Lab, a data company that has in the past analyzed Facebook’s viral content. To understand Peretti’s world view on viral you have to meet a Harvard-educated guy from Queens.

Well, you can’t meet Stanley Milgram, he’s no longer with us, but his legacy of tracking, documenting and interpreting social interaction lives on.

When Peretti talks about “social publishing,” or Mark Zuckerberg speaks about the “social graph,” they’re really referencing Stanley Milgram. A psychology professor at Yale in the 1960s, Milgram is a legend in social psychology and mathematical circles. But you may know his work from the Kevin Bacon Game, and I call him the Social Media Mad Man.

The Psychologist behind Social Media 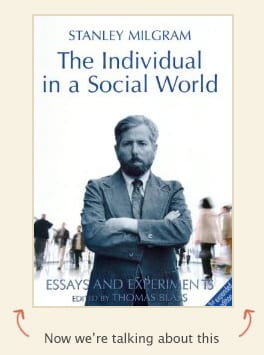 With $680, Milgram developed the Six Degrees of Separation Theory, which says we’re all separated by 5.5 people (six rounded up). The psychologist’s book, “The Individual In a Social World,” holds a treasure trove of analysis about how we interact with family and strangers within city and neighborhoods, in dorms and other groups.  Milgram, you see, is the invisible hand behind social network pioneers. Here’s an excerpt from the Social World:

“If influence is to be exerted by one person on another,” Milgram writes, “some message must pass from the influencing source to its target…social psychology acquires scientific potential, for what passes from one person to the next necessarily enters the public and thus measurable domain.”

Yeah, Milgram was analyzing viral content in the 1960s.

I loved Individual in a Social World! It’s not a typical social research read. Not a stuffy, Ivy-leaguer at all. Milgram waxes humorously about Peruvian women running away from him as he tries to take their picture or using, a “sexy joke,” to appeal to Harvard freshman in one of his experiments. The book chronicles a series of experiments Milgram conducted in the 1960s. It offers priceless, beautiful insights on how humans share content. Back then, the content was usually letters or telephone calls but the research implications resonate for content creators of today.

Here are some of Milgram’s most relevant findings:

Milgram’s book is a fascinating and informative read. The chapter on Photography is like a graduate course on why video goes viral. The book doesn’t teach everything, in fact there are some who question Milgram’s methods, but what does? But I find after reading Milgram I’m definitely more focused on human nature in content creation.

Ovetta Sampson, is a freelance digital writer for Blue Soda Promo, a promotional marketing company based in the Chicago area. An avid triathlete, she’s still finds time to run her own content marketing firm and blog.

Ovetta Sampson, is a freelance digital writer for Blue Soda Promo, a promotional marketing company based in the Chicago area. An avid triathlete, she's still finds time to run her own content marketing firm and blog.